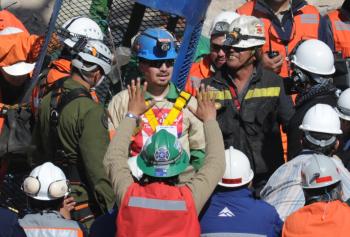 Alex Johnston
View profile
Follow
biggersmaller
Print
Oakley Radar sunglasses were donated to the trapped Chilean miners who are in the process of being rescued, according to NBC News.

The glasses were dropped down into the mineshaft where 33 miners have resided, trapped, for the past 69 days.

As the miners come up to the surface, they could suffer eye damage due to retinal sensitivity after being in a darkened area more than two months. The miners will spend the first couple of hours in dimly lit rooms so that their eyes can adjust, NBC says.

The glasses are ultra-dark wraparounds with a gray base and iridium coating to maximize eye protection, typically retailing for $260, the Associated Press reports. The Radars are used for sports like biking and skiing to keep UV radiation exposure at low levels.

Dr. Andrew Hartwick, assistant professor at the College of Optometry at Ohio State University, told AP that the miners’ retinas could be the most-likely damaged areas in their eyes.

"Just like when you walk out of a dark movie theater, it's uncomfortable in the light," Hartwick told AP. "It takes a few minutes for vision to return, and the retina needs to reset itself depending on light levels."

Oakley vice president for research and development Carlos Reyes said the company is “honored to have assisted” the rescue effort, AP said.