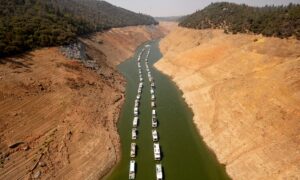 An apparent gang shooting in Oakland was caught by a driver’s dashboard camera as the driver drove past the two men shooting across the street.

The gunmen fire their guns at least 15 times during the shooting, which happened in West Oakland last Wednesday (August 14).

The driver, who wants to stay anonymous, decided to drive past through the hail of bullets to get away from the scene, at the intersection of 23rd Avenue and East 23rd Street.

“I was scared to death. I feel unsafe to live in Oakland,” he said.

At least six people were near the intersection, reported CBS.

“It’s really disturbing and alarming that this continues on a daily basis,” said Oakland City Councilman Noel Gallo, who lives near the shooting scene.

The video emerges as the Oakland Tribune reported that 12 people were shot in less than 24 hours over the weekend, and 3 of those people died.

“We need to have the political will to put the social structures in place so that people also know that they will not get away with these crimes,” Councilwoman Libby Schaaf told the Tribune. “To end the ‘no snitching’ culture. To have an adequately staffed police force. To continue to be the voices that help guide people to make better decisions.”

In one incident, a man who was caught breaking into a car outside a hair salon on Telegraph Avenue came back with a gun and shot the four people at the salon in broad daylight.

“He had to be out of his mind,” Dwayne McCarther, a co-owner of the salon, said of the shooter. “These guys don’t care anymore.”