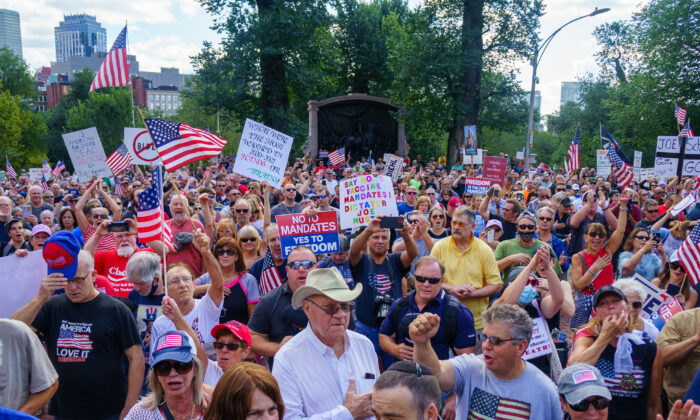 Thousands of people rallied their opposition to vaccine and mask mandates in front of the Massachusetts State House on September 26.Learner Liu/Epoch Times）
Regional News

Despite being approved for religious exemptions for the COVID-19 vaccine, an employee reported that 140 staff at the Oak Ridge National Laboratory (ORNL) in Oak Ridge, Tennessee, face unpaid leave beginning Oct. 15.

Leon Workman, a Linux systems engineer with ORNL, told The Epoch Times that though he was approved for a religious and medical exemption, he will join the 140 employees who will be left without a paycheck.

The research laboratory is managed by the University of Tennessee-Battelle (UT-Battelle), a not-for-profit company established to operate the U.S. Department of Energy-sponsored center comprised of 5,500 staff members.

In a Sept. 22 email Workman disclosed, ORNL’s Human Resources Director Jody Zahn told employees who had filed for an exemption that regular testing and allowing employees to continue to work from home, as they have been doing since January 2020, would cause “undue hardship” on the center.

“In evaluating your request, UT-Battelle has concluded that the only reasonable accommodation that we can provide to you without presenting an undue hardship is to allow you to remain a UT-Battelle employee, but without access to campus, by providing you with an unpaid leave of absence,” Zahn said. “You may elect to designate vacation time use prior to beginning your unpaid leave, but if you do not do so, your unpaid leave of absence will begin on Oct. 16 if you choose to remain unvaccinated.”

Zahn cited a high volume of approved requests, high transmission and low vaccination rates, a threat to health and safety of employees, and cost of testing the unvaccinated, as well as an intent for the center to bring remote workers back to the institute, as reasons for undue hardship.

“But unpaid leave is an undue hardship on an employee,” Workman said.

Workman filed for religious exemption in September and contracted the CCP (Chinese Communist Party) virus, commonly known as the novel coronavirus, the pathogen that causes COVID-19.

After being treated with monoclonal antibody infusion therapy, he applied for a medical exemption in addition to the religious exemption because of the CDC’s recommendation that one not get vaccinated 90 days after the treatment, he said.

Human Resources formed a panel, with a fact sheet, and summoned 24 employees to interview regarding their exemption.

“Two days later they claimed that two individuals who were involved tested positive for COVID-19, so the next day the panel did a blanket approval of all religious exemptions without any kind of adjudication or discernment,” Workman said.

According to Workman, the panel had “aggressively pursued” each employee’s religious beliefs, using a fact sheet.

In the fact sheet, ORNL says that fetal cell lines have been used in earlier vaccines, over-the-counter medical products, and “have been used in the past by consumer product companies including Pepsi, Nestle, Kraft, Campbell Soup, and Coca-Cola to test the ingredients and enhance flavor.”

The Pfizer-BioNTech and Moderna vaccines being offered at ORNL “were designed on computers,” the fact sheet says, adding that “neither is produced using fetal cell lines.”

The fact sheet also claims that many religious faith leaders “favor COVID-19 vaccinations on the grounds of care for one’s neighbors, family, and self.”

Accompanying the fact sheet is the religious exemption certification form an employee must sign stating that he or she has read and understood the vaccination policy and the fact sheet.

“I am aware that fetal cell lines are used in the testing of other consumer products,” it says.

It then states that “honesty requires that we tell the truth, always, and that we do not mislead others,” therefore, “with this understanding,” the form asks that the employee to certify that he or she has not, does not, or will not “use any of the products identified above, nor any other product that was developed, produced, or tested using fetal cell lines.”

Among the products listed were over-the-counter medications such as Tylenol, Advil, and Preparation H.

Workman and about 80 other staff members involved have sought legal representation with Schaerr-Jaffe, the law firm representing United Airlines employees.

“We are hoping to have a temporary restraining order by Oct. 12, which would cause them to halt progress on forcing people on unpaid leave,” Workman said.

In September, Schaerr-Jaffe negotiated a temporary restraining order that led to United Airlines agreeing to cease its plan to terminate 2,000 of its employees who declined to get the COVID-19 vaccine for religious or medical reasons.

“They are scared to terminate us, probably because of misgivings about potential non-lawful termination, but it’s still a termination, although in a slow and painful way for the employees,” Workman said.  “They are basically leaving us without paychecks for as long as it takes us to either force us to get the vaccine or to resign.”