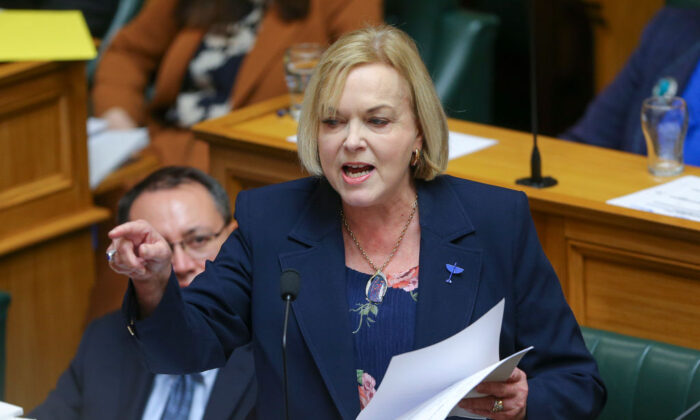 Opposition leader Judith Collins says the absence of New Zealand from the newly formed trilateral security partnership AUKUS is “concerning” and leaves many questions for the Ardern government to answer.

“It’s disappointing that after many years of New Zealand’s co-operation with our traditional allies, the current government appears to have been unable to participate in discussions for AUKUS,” the National Party leader said in a statement on Sept. 16. “It raises serious concerns about the interoperability of New Zealand’s defence force systems with our traditional allies in the future.”

“New Zealand is not interested in the nuclear side of the new partnership, but the deeper integration of technology, artificial intelligence and information sharing as well as security and defence-related science, industrial bases and supply chains are areas we would traditionally be involved in,” she added.

“New Zealand’s strong nuclear-free stance shouldn’t have been a barrier to us joining such a partnership. We could have been carved out of the nuclear aspect of the partnership.”

AUKUS was announced on Sept. 16 by U.S. President Joe Biden, and British and Australian Prime Minister’s Boris Johnson, and Scott Morrison during a joint virtual press conference from each of their capitals.

The new alliance will see the U.S. and UK governments assist Australia with acquiring nuclear-powered submarines amid ongoing tensions with the Chinese Communist Party (CCP) in the region.

Read More
Bannon: We Will Be in a Kinetic War with China If We Don’t Win the Information and Economic War

The move would also make Australia one of the only countries in the world to operate nuclear-powered submarines, despite ratifying the non-nuclear proliferation treaty.

“We will launch a trilateral effort of 18 months, which will involve teams—technical and strategic and navy teams—from all three countries to identify the optimal pathway of delivery of this capability,” according to a joint statement by the three governments.

AUKUS will add an extra dimension to the existing Five Eyes’ arrangement, which has been the main intelligence sharing network between Australia, UK, United States, Canada, and New Zealand—and has, of late, been a platform for democratic allies to engage on issues related to countering the CCP.

NZ Prime Minister Jacinda Ardern said she welcomed the “increased engagement” of the United States and the United Kingdom.

But National Party Foreign Affairs spokesperson Gerry Brownlee was concerned NZ could miss out on discussions relating to cybersecurity and intelligence.

“We need assurance we’re not left out of information streams that counter-terrorism,” he said in a statement.

“The government needs to come clean about what happened here. Does this new partnership affect our Five Eyes relationship? What about our relationship with Australia, the one country that we have the closes defence and economic partnership? And will this have an impact on our standing as a responsible international citizens?” he added.

“The government needs to explain why it looks as though New Zealand has been left out of the loop.”