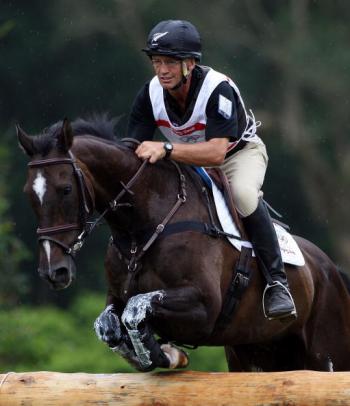 Andrew Nicholson and Lord Killinghurst before they crashed out of the Eventing Cross Country event held at the Hong Kong Olympic Equestrian Venue. (Julian Herbert/Getty Images)
US

Spain outclassed the New Zealand women’s basketball team today winning 85 – 62. Ranked fifth in the world the Spaniards, led throughout and by halftime were ahead 40-27.

Jillian Harmon scoring 22 points and Kate McMeeken-Ruscoe, 10 points were the pick of the kiwis.

New Zealand coach Mike McHugh paid tribute to the Spanish side. “They are extremely capable. They capitalised on any errors we made, ”said McHugh. New Zealand’s next game is against China.

Mark Todd, was first away for the equestrians today. Out of the medal hunt in the individual Todd rode cautiously in order to make sure the team got off to a good start.

But the next two riders had poor rounds when Tompkins,  incurred over 75 penalty points and Nicholson was eliminated after a spectacular crash.

With the best three team scores to count the pressure came on Joe Meyer and Caroline Powell. Meyer had a good round successfully lodging a protest against penalties. Caroline Powell and her grey Lenamore finished with the best Kiwi score. The performance  brought the team back up into sixth spot. Powell is the top kiwi rider sitting in 25th place with Todd in 28th and Meyer 34th.

Weightlifter Mark Spooner will find out tomorrow where he finishes. There were so many entries for Spooner’s 69kg division that it has been divided into three groups. He lifted a 281kg total leaving him fifth in his group.

The Oly-Whites came back to earth when they were soundly thumped by Brazil. 5–0. The New Zealanders were on the back foot from the start when  Brazil scored after just three minutes. Ronaldinho, the Brazilian captain, scored two goals, and Anderson, Alexandre Pato and Rafael Sobis one each.

The Brazilians totally dominated proceedings, having 66 per cent of possession and firing 15 shots at New Zealand. The Oly-Whites now lose their captain Ryan Nelsen, who returns to play for Blackburn Rovers in England.

The New Zealand men’s 4 x 100m freestyle relay team capped off a fine night in the pool. Their time of 3min 15.41, sliced two seconds off the mark they set earlier this year at the New Zealand trials in Auckland.