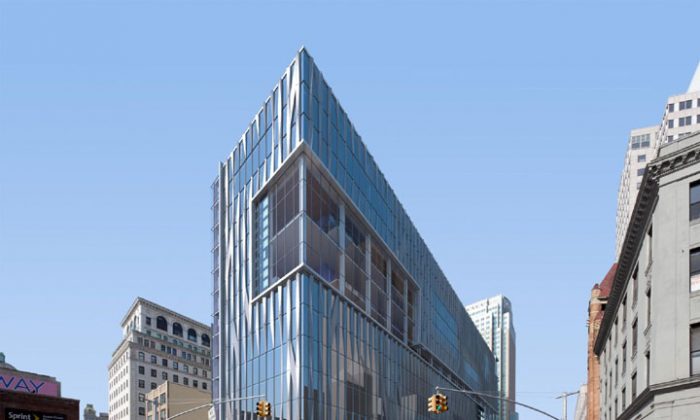 A rendering of the planned Center for Urban Progress, pegged for 370 Jay St., in downtown Brooklyn. The view is looking toward Jay Street. (Courtesy of NYU)
US

NEW YORK— A downtown Brooklyn building serving mostly as a warehouse will be transformed into a state-of-the-art applied science research center. The site, 370 Jay St., will house the NYU Center for Urban Progress (CUSP), the second winner of the city’s Applied Sciences NYC campus competition.

After Cornell University and partner Technion-Israel Institute of Technology were awarded money and land on Roosevelt Island last December, it was unclear whether there would be additional winners of the competition.

Then on Monday, Mayor Michael Bloomberg and Speaker of the City Council Christine Quinn were among government officials, university executives, and downtown Brooklyn business leaders who gathered in downtown Brooklyn to announce the new winner.

Though announced on Monday, the decision is pending approval from the MTA board, which is scheduled to consider it during its monthly meeting on Wednesday.

While Cornell and Technion received $100 million, CUSP will get $15 million. NYU will have to give the MTA, which has equipment in the downtown Brooklyn building, $50 million for relocation, and the NYPD, which also currently uses the building, potentially up to $10 million.

Yet the university and its partners will get the space for only $1 per year in rent, with an option to purchase after 99 years, according to a letter from NYU President John Sexton to students, staff, and alumni.

NYU’s partners include academic institutions such as City University of New York, Carnegie Mellon University, University of Toronto, University of Warwick, and Indian Institute of Technology Bombay, and companies including IBM and Cisco. The center will aptly sit inside Brooklyn’s “tech triangle.”

The building at 370 Jay St., is a 460,000-square-foot office building on the corner of Jay Street and Willoughby Street near the Jay Street-Metro Tech subway station in downtown Brooklyn.

Two top officials of the MTA, city Transit President Thomas F. Prendergast, and Chairman and CEO Joseph Lhota, joined in the announcement on Monday, perhaps indicating that the measure will pass the board.

The project will take six months of due diligence “to confirm the costs associated with renovation work and the timing of relocation of MTA and NYPD operations,” according to the city’s press release. Meanwhile, the consortium behind CUSP would immediately lease and renovate 60,000 square feet of nearby space and accept its first class in September 2013.

If approved by the MTA board, NYU would begin renovating 370 Jay St., in the fall of 2014; the MTA “would be expected to” fully relocate in spring 2016; and NYU’s first class would begin by September 2017 after renovations were completed, according to the release.

Phase 2 of CUSP includes plans for students, faculty, and alumni to apply for startup funding from NYU’s Innovation Fund, which will try to raise $20 million by fiscal year 2018.

NYU announced on Monday that Steven E. Koonin, a theoretical physicist, would be the director of the new center. He has served as undersecretary of energy for science and chief scientist of BP.

Carnegie Mellon, which is part of the new center, also made a joint proposal for space inside Brooklyn’s Navy Yard with Steiner Studios. Columbia University made a solo submission for expansion near its existing Morningside Heights campus.