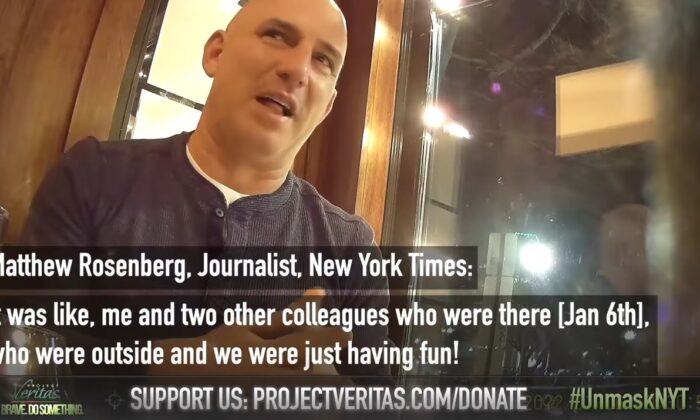 A New York Times reporter who has claimed it’s a lie that the Jan. 6, 2021 breach of the U.S. Capitol “was no big deal” was captured on undercover video saying the left has overreacted to what happened.

The left’s “overreaction” in some places “was so over the top,” Matthew Rosenberg, the reporter, told Project Veritas, a nonprofit journalism group.

Rosenberg smiled as he said he was “supposed to be traumatized” by the breach but described himself and two colleagues he was with on Jan. 6 as “just having fun” and said he wanted to tell younger reporters at the paper who have said they were scared of the events of the day that “you were not in any danger” and to “man up.”

Rosenberg, being taped at restaurants, also said that there were “a ton of FBI informants amongst the people who attacked the Capitol.”

Rosenberg was one of the authors of a recent story that alleged there were “false narratives” being pushed by some about Jan. 6, including the allegation that “the FBI planted agents to stir up the crowd” and claims that Jan. 6 “was no big deal.”

Rosenberg and a New York Times spokesperson didn’t respond to inquiries from The Epoch Times.

Rosenberg told Project Veritas, when confronted with the footage, that he was “talking [expletive] at a bar” but stands by what he said.

Reporters Rosenberg named did not return inquiries except for Nicholas Fandos, who declined to comment.

Rosenberg also said his employer may lose the defamation case brought against it by Project Veritas.

“That was a [expletive] up. We might well lose that one,” he said.

Project Veritas sued The New York Times in 2020 over the paper’s reporting on videos recording people in Minnesota involved in ballot harvesting operations.

A New York Supreme Court judge, in a ruling rejecting The New York Times’ attempt to dismiss the suit, said the writers of the articles met “the dictionary definitions of ‘disinformation’ and ‘deceptive'” because of their “failure to note that they injected their opinions in” them.

The case is ongoing.

The reporters are “human beings,” Rosenberg said, “so if our broader culture is in a moment where everybody thinks they know best, that’s going to end up reflecting itself—we’re part of that culture.”

“I don’t think they consciously are aware of these opinions. You inhabit the world you live in,” he opined.

Rosenberg was also captured on video describing some of his colleagues as part of “a very vocal, loud minority that dominates social media and therefore has this hugely outsize influence,” at one point saying they’re “bullies” who have successfully won concessions from management.

At least some of the group have been subject to “a certain amount of indoctrination” at elite schools and have personalities that “would have been considered toxic” in years past, he added.