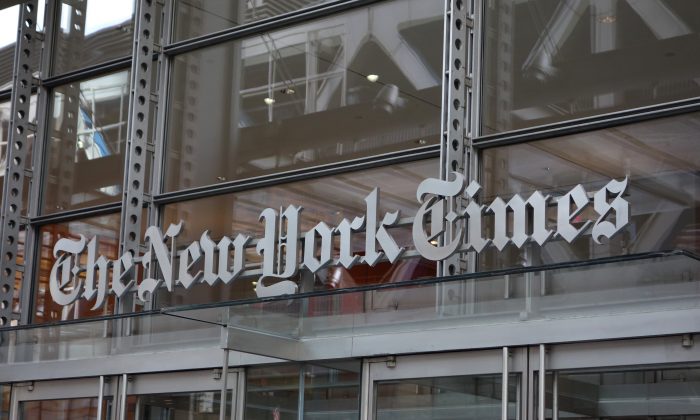 The sign over the west entrance of the New York Times building at 620 Eighth Ave. in New York on April 28, 2016. (Don Emmert/AFP/Getty Images)
By Zachary Stieber

New York Times executive editor Dean Baquet said that the paper’s focus has shifted from the Russia-Trump collusion theory to Trump’s “character,” while agreeing with staffers that the paper should focus on race in its stories since “race has always played a huge part in the American story.”

In a town hall with staffers following its bungled headline about Trump’s response to recent mass shootings, Baquet said the focus has gone “from being a story about whether the Trump campaign had colluded with Russia and obstruction of justice to being a more head-on story about the president’s character.” A recording of the town hall was obtained by Slate.

The Times relentlessly pushed the Russia-Trump narrative, which documents, texts, and testimony indicate originated with the Clinton campaign and officials in the Obama administration. Special counsel Robert Mueller punctured the theory earlier this year when his team released its report and said it couldn’t establish collusion between Trump’s campaign and Russia.

Baquet said that “we built our newsroom” to cover the Russia-Trump story “and we did it truly well.”

“Now we have to regroup, and shift resources and emphasis to take on a different story,” he said.

Staffers at the town hall pushed Baquet about why the Times doesn’t frequently call some of what Trump says racist, and Baquet said it’s “more powerful … to quote the remarks” that are made.

But he agreed with one staffer that race plays a big role in what’s going on in America, quoting NPR ombudsman Keith Woods, who said in a recent piece, “Were we to use my moral standards, the line for calling people and words racist in this country would have been crossed decades ago,” but argued that journalists shouldn’t use words like racist because it’s “moral labeling,” adding “that’s not what journalists do. We report and interview and attribute.”

Baquet said that Woods’s argument “boils down to this: pretty much everything is racist.”

“His view is that a huge percentage of American conversation is racist, so why isolate this one comment from Donald Trump?” Baquet said. “I don’t know how to answer that, other than I do think that that race has always played a huge part in the American story.”

He said that the Times newsroom plans to focus heavily on race in the next year because he believes it’s “going to be a huge part of the American story.”

Another staffer said that they were wondering about the strategy “for getting us through this administration,” claiming, “It’s a very scary time.”

Baquet turned back to the Russia-Trump theory, saying the question was: “Did Donald Trump have untoward relationships with the Russians, and was there obstruction of justice?”

He said the Times covered the story well but noted that Mueller’s report and his limp testimony before Congress undercut the main premise of the narrative, shattering the credibility of the Steele dossier, and causing the story to change to Trump himself. “We’re a little tiny bit flat-footed,” he admitted.

“I think that we’ve got to change,” he said. The Times must “write more deeply about the country, race, and other divisions.”

“I mean, the vision for coverage for the next two years is what I talked about earlier: How do we cover a guy who makes these kinds of remarks?” Baquet said. “How do we cover the world’s reaction to him? How do we do that while continuing to cover his policies? How do we cover America, that’s become so divided by Donald Trump?”

The Times has admitted in the past that it has clear bias in reporting on Trump. Jim Rutenberg, a media columnist, said in an August 2016 that they considered Trump “an abnormal and potentially dangerous candidate” and that reporters were changing the ways they usually reported.

Baquet later agreed, saying: “I think that everybody went in a little bit shell-shocked in the beginning, about how you cover a guy who makes news constantly. It’s not just his outrageous stuff…he says things that are just demonstrably false.”

The town hall on Monday was followed by the Times demoting an editor for social media posts that riled activists and lawmakers on the left, prompting a fresh attack by Trump, who wrote on Twitter: “Wow! The Deputy Editor of the Failing New York Times was just demoted. Should have been Fired!”

“Totally biased and inaccurate reporting. The paper is a Fraud, Zero Credibility. Fake News takes another hit, but this time a big one!” he added.

Correction: This article was updated on Aug. 19, 2019, to reflect that the Trump-Russia collusion allegations originated, in part, with the campaign of then-presidential candidate Hillary Clinton.