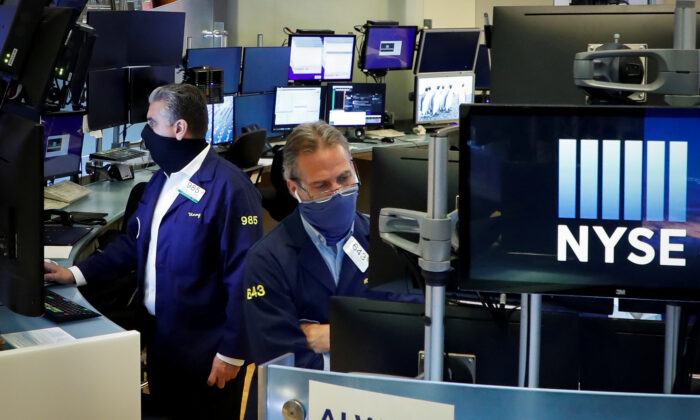 Traders wearing masks work on the floor of the New York Stock Exchange in New York on May 26, 2020. (Brendan McDermid/Reuters)
Markets

The New York Stock Exchange may leave New York if state lawmakers approve a proposal to tax stock trades, the president of the exchange said on Feb. 9.

“The New York Stock Exchange belongs in New York,” Stacey Cunningham wrote in an op-ed in the Wall Street Journal. “If Albany lawmakers get their way, however, the center of the global financial industry may need to find a new home.”

Headquartered on Wall Street and calling New York City home since 1792, the exchange is the world’s largest in terms of market capitalization.

Cunningham said that while New York has been known as the center of global financial power for decades, officials shouldn’t take that position for granted. Companies and brokers are increasingly using computers and other modern technology to conduct business, she said, also noting an overall shift toward remote work amid the COVID-19 pandemic.

“While New York has remained a center of gravity for the financial industry, many employees of ‘Wall Street’ firms are migrating to Florida, Texas, and other states with hospitable tax policies. New York’s leaders did the right thing in 1981 when they made the state’s stock-transfer tax dormant through a 100 [percent] rebate,” she wrote.

“If lawmakers opt to reinstate that tax, the NYSE may need to follow the lead of those relocating firms. Some of our customers are already asking about our willingness to relocate.”

The transfer tax was originally imposed in 1905 but virtually eliminated in 1981. It taxes stocks being traded, based on the dollar value of the stock. Lawmakers recently introduced a bill to amend the tax law to tax transfers of stocks, bonds, and derivatives, citing the budget shortfall the state faces.

Cunningham cited a recent report by the nonpartisan Citizens Budget Commission, which estimated that projections by advocates of the tax were too high.

“Advocates claim the tax could yield up to $13 billion in annual revenue, based on data from past years. The record from fiscal year 2020, however, shows collecting the STT this past year would only have yielded $4 billion, just a third of advocates’ estimate,” the commission stated.

“In fact, the State would likely amass even less, since firms might avoid the tax by using new technology or relocating the trading portion of their businesses outside New York. While tax avoidance could yield disappointing revenue on the newly reinstated tax, relocation of securities industry jobs outside of New York would harm the State’s employment opportunities and tax collections.”

The group recommended not reviving the tax and using other ways to close the budget gap the state is facing, including reducing local aid and eliminating capital spending on some economic development projects.

Gov. Andrew Cuomo’s administration has signaled it may not support the bill.

In remarks last month, state Budget Director Robert Mujica told reporters about the tax, as well as other proposed taxes such as a levy on the ultrawealthy: “A lot of these ideas, people talk about them, but they haven’t been fleshed out.”

Mujica said tax proposals won’t necessarily be needed if the federal government provides funding to the state. President Joe Biden is pushing a bill that would give state and local governments additional money. Democrats in Congress support the package and are working to pass it without Republican support.

If a tax such as the one that was proposed in 2020 in New Jersey were passed, it would likely result in companies moving from New York, Mijuica added.

“If we increase the tax like that, you mobilize people, potentially just move your transactions and your servers to another part of the country where those taxes don’t exist,” he said.