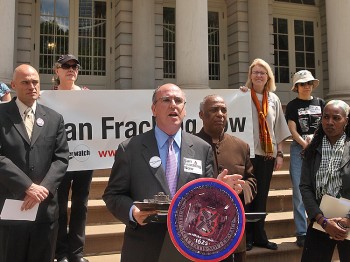 Eric Weltman, senior organizer of Food & Water Watch, is joined by fracking ban supporters like David Braun (L), founder of United for Action, and Councilman Charles Barron (R), while outlining the findings of a newly released report 'The Case for a Ban on Gas Fracking,' on Monday at City Hall. (Gary Du/The Epoch Times )
US

By Zachary Stieber
Print
NEW YORK—With a moratorium on controversial forms of hydraulic fracturing, or fracking, about to expire, residents and advocates concerned about the safety of New York’s water are stepping up their campaign to get the moratorium extended another year and expanded.

The shocking and destructive environmental and public health impact of fracking is outlined by a report made public on Monday by the Food & Water Watch, a national consumer advocacy group that recommends banning shale gas fracking in the United States.

“There are alternatives to natural gas, but there are no alternatives to water,” said Eric Weltman, senior organizer of Food & Water Watch, at a press conference. A major element in the fracking process is the use of large amounts of water, which typically end up at least partly contaminated afterward.

The new report is a compilation of studies carried out over the past year and a half by a diverse set of groups like the New York Times and Cornell University. The consequences from the natural gas extracting procedure include groundwater, surface water, and air contamination.

Some alleged instances of water contamination have been so bad that people living near fracking sites could light their tap water on fire.

The scene was captured in the documentary film, “Gasland,” and has been contested by gas companies.

The state Assembly approved legislation that would freeze issuing new fracking permits until June 2012. The legislation would also change fracking wastes from being categorized as nonhazardous to hazardous. Now, the Senate has less then a week to pass the moratorium before its legislative session breaks. The current moratorium ends in July.

The Independent Oil & Gas Association of New York State issued a memorandum in opposition to the law, saying that it will cost jobs and end fracking that has been safely done for years.

David Braun, founder of United for Action, counters that the fracking jobs are usually for out of state workers since they require over one year of training. He says the clean energy jobs that could replace them would be filled by people in state.

"These are people that are going to stick around here for generation after generation,” said Braun, whose group is composed of volunteers concerned with public health and sustainability.

The environmental impact of fracking is currently being investigated by government scientists both at the state and federal levels.

The report released on Monday reinforces a constantly growing pile of evidence about the harmful byproducts of fracking. Fracking is a method of fracturing deep underground rock formations with chemicals and sand, combined with copious amounts of water. The fissures caused from this fluid release natural gas, which is then pumped to the surface.

Fracking has been touted by proponents for several reasons. Many landowners get rich from selling their land to gas companies. Also, some say it’s a safer and cleaner alternative to coal and oil.

However, the safety gaps detailed in the 10 studies seem to contradict these claims. For instance, the New York Times investigative report from February revealed Pennsylvania wells have produced more then 1.3 billion gallons of wastewater, most of which was sent to treatment plants incapable of removing many of its toxic elements. The report said that at least 12 plants in three states discharged the partly treated wastewater into bodies of water such as rivers and lakes.

“This report is damning evidence that not only should this not be our energy future, but it is dangerous and should be stopped,” said Braun.

Another report, by the Environmental Working Group, found some fracking fluids contained such a large amount of benzene, a toxic chemical, that they would contaminate more then 100 billion gallons of drinking water from a single fracked well.

On May 31, New York Attorney General Eric T. Schneiderman filed a lawsuit against the federal government for allowing natural gas drilling, including the fracking technique, in the Delaware River Basin, which encompasses a portion of New York City's watershed, without conducting a full environmental review.

“[This] industry, which has already devastated parts of Pennsylvania, is hungrily eyeing New York for fracking,” stated Weltman

Globally, China and some European countries have started fracking, though in other countries, including the United Kingdom and France, public outcry against the technique has slowed progress. South Africa and Quebec, Canada, have passed moratoriums against fracking.