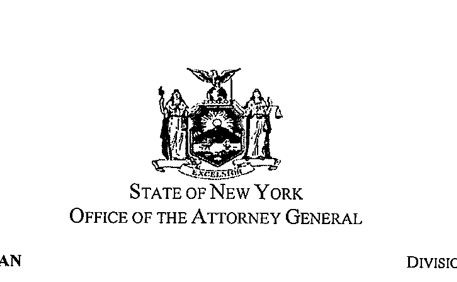 The insignia on the letter sent to the Orange County Board of Elections on Oct. 23, 2015. (Holly Kellum/Epoch Times)
New York

After over a month of investigation, the New York State Attorney General’s (AG) office concluded that the challenge to 30 Chinese-American voters in Deerpark was unlawful and has given the Board of Elections actions it must take to resolve the AG’s inquiry.

In late August, Deerpark Supervisor, Gary Spears submitted a challenge to 30 voters registered at 140 Galley Hill Road in Cuddebackville, which he claimed to believe was a three-bedroom house. The address is used by Fei Tian College and Fei Tian Academy of the Arts and their dormitories. All challenged voters were later confirmed to be U.S. citizens.

In a letter to the Orange County Board of Elections, the AG’s office said the basis for the investigation was faulty because Spears never stated his reason for questioning whether registrants were eligible to vote nor how he got his information.

Despite that, the BoE referred the case to the Sheriffs office to investigate, which falsely extrapolated from incomplete ICE data that two of the registrants were Green Card holders.

The AG’s office faulted the BoE for canceling those persons registrations without the option of a hearing and then requiring 17 others to bear the burden of proof by bringing their passports to the polls on election day.

The Board now has to notify the registrants that the challenge is null, train poll workers to identify voter intimidation and harassment, and submit any voter challenges to the AG’s office for the next year. The AG’s office will also monitor the elections in Deerpark this year.