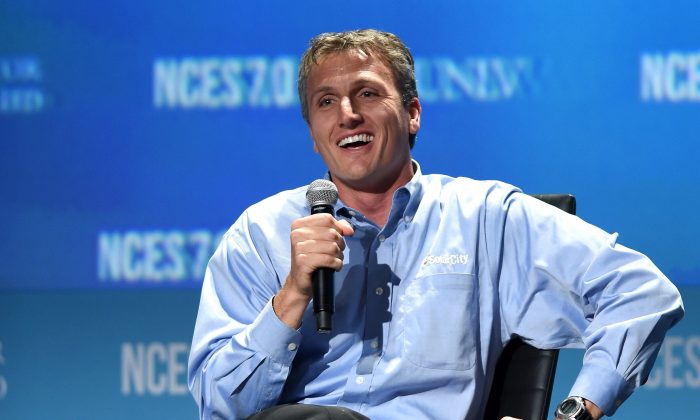 Co-Founder and CEO of SolarCity Lyndon Rive speaks at the National Clean Energy Summit 7.0 at the Mandalay Bay Convention Center in Las Vegas, Nevada, on Sept. 4, 2014. Political and economic leaders are attending the summit to discuss a domestic policy agenda to advance alternative energy for the country's future. (Ethan Miller/Getty Images)
Business & Economy

NY’s $750M Investment in SolarCity Jobs Not Without Risks

ALBANY, N.Y.—New York state has gone into business with a national solar energy company, committing $750 million to support California-based SolarCity in exchange for the promise of high-tech jobs in western New York and economic spinoff that reaches across the state.

But the project comes at a time of major changes and growing competition in an already competitive industry, with companies changing their business models as government subsidies that have helped sustain them are slated to start drying up next year.

And this week, shares of stock in SolarCity, which has not been profitable, were pummeled after the company on Thursday reported a net loss of $234 million during the most recent quarter and lowered expectations for growth through next year.

Time will tell if the investment promoted by Gov. Andrew Cuomo as part of his “Buffalo Billion” economic development initiative pays off, or the state is left with an empty 1 million-square-foot facility on the site of a former steel factory.

Here’s a rundown of New York’s deal with SolarCity:

SolarCity was formed in 2006 by brothers Lyndon and Peter Rive, cousins of PayPal and Tesla entrepreneur Elon Musk, who is chairman of the company’s board and its largest shareholder.

It’s the biggest of several large players in the solar installation industry, concentrating mostly on residential projects but also working with commercial customers and on “utility scale” projects—large arrays of panels. It has been growing in terms of installations and revenue, yet remains unprofitable. Lyndon Rive recently told The Associated Press the state’s help is critical to SolarCity’s plans for the future.

“The plan is to build more factories after this one factory,” he said. “It would be hard to have done it without that support.”

The “Buffalo Billion” theme is a Cuomo administration creation, but the SolarCity deal was done at several arm lengths from Cuomo’s office, at least on paper. Brokered by the state Economic Development Corp., the project is being jointly administered with the state university system through an arm of its Research Foundation, SUNY Polytechnic. It’s modeled on the state-subsidized chip research and manufacturing complex around Albany that includes GlobalFoundries, which recently announced job cuts because of softness in the market.

SolarCity is getting a huge, state-owned factory essentially rent-free. The deal calls for them to pay $1 dollar a year in rent—plus utilities—for 10 years in exchange for investing $5 billion in capital, operational and other expenses over that time. And the company has promised to create 1,460 high-tech jobs at the plant, 1,440 “manufacturing support and service provider jobs” and at least 2,000 other jobs in the state. Those include installation and sales crews, including the uniformed workers who buttonhole shoppers at big-box stores to drum up business. The job commitments extend for 5 years after full production begins. Rive said panels are scheduled to begin rolling off the lines in the first quarter of 2017 and reach 10,000 panels a day.

Michael Hicks, a professor of economics and director of the Center for Business and Economic Research at Ball State University, said the agreement is very large and the structure is “atypical” of economic development projects. He also said the number of jobs to be generated is small given the investment.

“This is an eye-popping deal, a very questionable use of state funds, but a huge windfall for the investors of SolarCity,” Hicks said.

EDC spokesman Peter Cutler defended the agreement, saying “the state is not giving a penny to SolarCity. Instead, it is paying $350 million for the future solar panel manufacturing facility and $400 million for the equipment going in it.”

“The state will retain ownership of the building and the equipment it installs,” he said.

The first beneficiaries of the huge project are the builder, subcontractors, construction workers and suppliers working on it.

The construction deal went to LPCiminelli Inc., a large western NY company with deep political and community ties. Its chairman, Louis P. Ciminelli, has a long resume that includes time as a trustee and chairman of the New York Power Authority.

State campaign records show he and his family have contributed hundreds of thousands of dollars since 2007 to local and state candidates from both major parties, including Cuomo.

The award of the construction contract by the EDC has come under scrutiny by federal authorities because of allegations the bid specifications effectively steered the work to LPCiminelli, which state officials have denied.

Rive said there’s plenty of demand in the market for solar panels to support the factory. He expects the new plant to supply only 20 percent of the panels his company expects to need in 2017 and SolarCity will continue buying panels from current suppliers in countries including China and Japan. Rive also said the company expects it will need another new, larger plant in the future.

As for the stiff competition manufacturing panels that have steadily improved in technology and dropped in cost, Rive said the panels to be built in Buffalo are the most efficient in the world.

What Could Go Wrong

In its federal financial filings, SolarCity includes a long list of potential risks to its business, many dealing with the global economic climate and regulation that can affect any business but some particular to its industry. One of the most significant is the impending sunset of generous federal subsidies the industry has harvested with each new installation. Set to decline at the end of 2016 and go away in 2017, Rive told the AP he believes there is a “better than 50 percent chance” that Congress will restore the incentives.

Another risk is that a federal investigation of grants to the solar industry under the 2009 stimulus program could lead to government lawsuits seeking to recover possible overpayments to the industry, including SolarCity.

What if SolarCity ultimately can’t make a go of it? Among the risks SolarCity cites in its SEC filings is the possibility it won’t be able to meet its obligations to the state or otherwise be unable to continue running the plant. In that event, it says, it will have to pay the Research Foundation $41.2 million in each year it falls short, along with other potential penalties. “We believe this more than adequately protects the state’s investment,” Cutler said. He said the contract with SolarCity assures the payments even in the event it fails as a business.

Worst case? The state is left with 1.2 million square feet of space to fill.