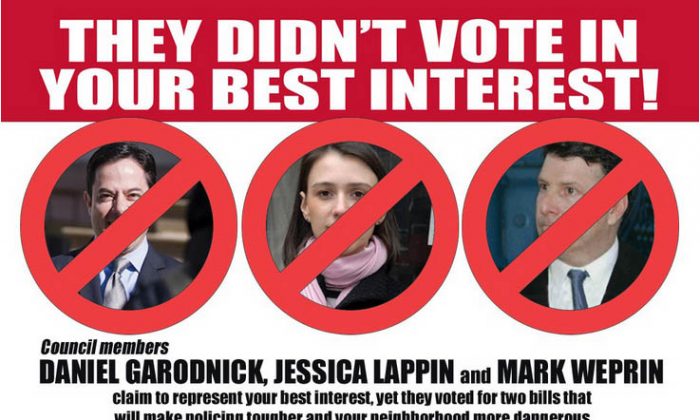 A screenshot of the Patrolman’s Benevolent Association’s website home page asking voters to send emails to council members who voted in favor of bills reforming stop and frisk.
New York

NEW YORK—The Patrolman’s Benevolent Association (PBA) is turning the heat up on Council members who voted in favor of two bills which aim to reform stop-and-frisk practices. They hope to sway at least one Council member to rescind a supporting vote, which would break the bill’s veto-proof majority.

After two days of handing out flyers in the Council districts of Dan Garodnick, Jessica Lappin, and Mark Weprin, the labor union representing police officers launched a website Wednesday morning to allow New Yorkers to auto email all 34 Council members who voted in favor of the bills.

After filling out a first and last name and providing an email address, a click of the button will send a message to the Council members, asking each to reconsider supporting the legislation.

The PBA have been outspoken critics of Intro 1080, which will expand the bias-based profiling laws in the city, and allow New Yorkers to sue if they feel they have been profiled. The PBA is also against Intro 1079, which will create an inspector general for the NYPD.

“We get thousands of people visiting the website every day, and we are hoping many of them take the time to send an email to those council members,” said PBA spokesperson Al O’Leary.

The organization, which is the largest labor union representing police officers in New York City, believes the bills will make policing tougher and the streets of New York more dangerous, views shared by Bloomberg and NYPD Commissioner Ray Kelly.

O’Leary made no secret why the PBA targeted Garodnick, Lappin, and Weprin. “The PBA believes they represent districts that are pro law enforcement and pro public safety,” O’Leary said. “Those three districts are very conservative communities.”

“We wanted to choose people who would be responsive to their constituent’s complaints. We don’t believe they represent the best interests of their constituents on these particular votes,” O’Leary said.

Lappin is running in a tight field for Manhattan Borough President against fellow Council members Robert Jackson and Gale Brewer (who both voted in favor of Intro 1080 and 1079), and Julie Menin, former Chair of Community Board 1.

Garodnick, who is running for his third term in Council District 4 on the Upper East Side, faces no notable opposition in the race. Campaign Finance Board (CFB) records show Helene Jnane running for District 4, however she has raised no money, has no campaign website, and has no official Twitter account.

Garodnick, a well respected member of the Council, whose name has come up as potential Speaker of the City Council when current Speaker Christine Quinn leaves office this year, has nearly $900,000 in his war chest.

Weprin, who is running for his second term in Council District 23 in Queens, does not have an opponent in the race, according to CFB records. It is believed Republican Joseph Concannon, who ran an unsuccessful campaign for the State Senate, may try for a run, according to a report from Capital New York.

Outside City Hall on Thursday, Weprin said he did not know why the PBA was targeting him. “I believe there is a misconception that I represent this, “white district”, because I’m a white person. I actually represent a district that is 70 percent people of color,” Weprin said, according to Ben Max of DecideNYC.com.

Weprin said he could not guarantee any vote other than his. “Anything is possible. The Mayor is a very powerful guy, and I would never sell him short. I can only speak to this one vote, and no, I’m not changing my vote,” Weprin said.

When asked why the PBA would try to campaign against Council members who have no opponents, O’Leary said, “You would have to talk to our political operatives. I am just the press guy,” adding, “and no, you cannot talk to them.”

During an interview with NY1 on Tuesday night, Speaker Quinn, who voted in favor of the inspector general bill but against the biased-based profiling bill, said she did not believe any Council member would change their vote.

“I have been in and around the City Council for a long time, and those numbers don’t change in the override votes,” Quinn said. “People stick with their positions. People know they are voting on a bill that is going to be vetoed and they vote in a way they plan to stick with.”