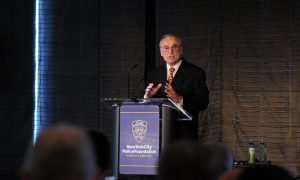 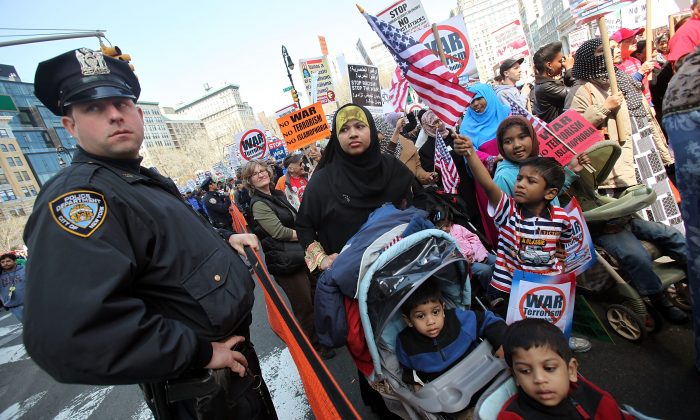 NYPD Working to Increase Ranks of Muslims in Department

NEW YORK—The New York Police Department is working to recruit more Muslims, and is asking for help within the community to better refine outreach aimed at stifling the lure of overseas terror groups, officials said Monday.

Right now, there are about 800 Muslim uniformed police officers out of about 35,000, according to the NYPD Muslim Officers Society. Of those, only about 20 are higher ranked officials. Lt. Adeel Rana, commanding officer of the community affairs immigration outreach unit, said there has been a slow increase over the past decade, but it has been rapidly changing in the past year and a half.

“It’s changing every day; we are getting more and more recruits,” he said. “And as they see people of their own religion in uniform, their eyes brighten.”

There has been an effort to increase openness and communication with the community since the new administration took over, stinging from a public outcry over the contentious stop, question, and frisk policy and the surveillance of Muslims. A unit that investigated Muslims under the previous police commissioner was disbanded, and Commissioner William Bratton said Monday that officials had worked hard to regain trust.

“We will not do anything to jeopardize that trust,” he said.

In an effort to reach out to more recruits, the NYPD is also expanding a cadet program where college students are given stipends and fast-tracked to a job. Rana said officers also attend community meetings and fairs. A video played during the department’s annual pre-Ramadan conference showed dozens of uniformed officers who are Muslim saying: “We are your NYPD.”

Muslim leaders said they are encouraged by recruitment efforts.

“The more Muslims who work in the NYPD the better,” said Ibrahim Hooper, a spokesman for the Council on American–Islamic Relations. “This is a way to break down the mistrust and create bridges in the community. Where an informant breaks down trust, a law enforcement officer builds it.”

The outreach is also meant to counter efforts by overseas terror groups to radicalize youth over the Internet.

While rebuilding the relationship, he said, officials are working to reinforce a message: “You’re one of our communities and we are your police.”