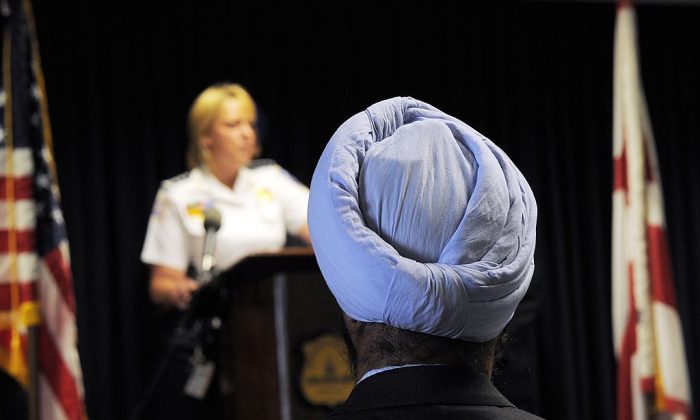 A Sikh man wearing a turban listens as Metropolitan Police Chief Cathy Lanier speaks to release the Metropolitan Police Department (MPD) new uniform and appearance rules at the MPD headquarters in Washington, DC, on May 16, 2012. MPD became the first major police department in the US to proactively allow Sikh Americans to serve as full-time officers while keeping their articles of faith. AFP PHOTO/Jewel Samad (Photo credit should read JEWEL SAMAD/AFP/GettyImages)
New York

NEW YORK—The New York Police Department is now allowing Sikh officers to wear turbans in place of the traditional police cap and grow beards up to a half-inch long for religious reasons.

Police Commissioner James O’Neill announced the new rules that affect all religious members on Wednesday following a graduation ceremony for new police recruits. Officers must first get approval and the turbans must be navy blue and have the NYPD insignia attached.

Before, Sikh officers had to fit their turbans under their department issued cap. Beards were forbidden because they interfered with wearing gas masks.

O’Neil says there are about 160 Sikhs serving in the police department.