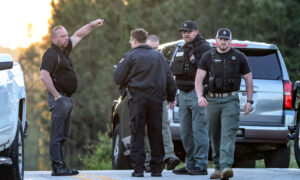 NYPD: Teens Punch Woman, 67, in the Face in the Bronx; Knock out Man

Advisory: Video may be disturbing for some viewers
By Jack Phillips
biggersmaller
Print

The New York City Police Department posted security footage of teens attacking a man in the Bronx. They later punched a 67-year-old woman who witnessed the attack.

The NYPD said that there is a $2,500 reward for information regarding the assault, which occurred at White Plains Road and Gleason Ave, at 1 a.m. on Oct. 7.

According to Pix11, the man who was attacked in the surveillance footage tried to fight off the teens. However, the man, 33, got knocked out.

The teens punched a 67-year-old woman who yelled at the teens. They punched her in the face, breaking her eye socket.

The 33-year-old man woke up several minutes later and went to the deli for help.

A family member told Pix11 that the 67-year-old is fine.

Other details about the assault are not clear.