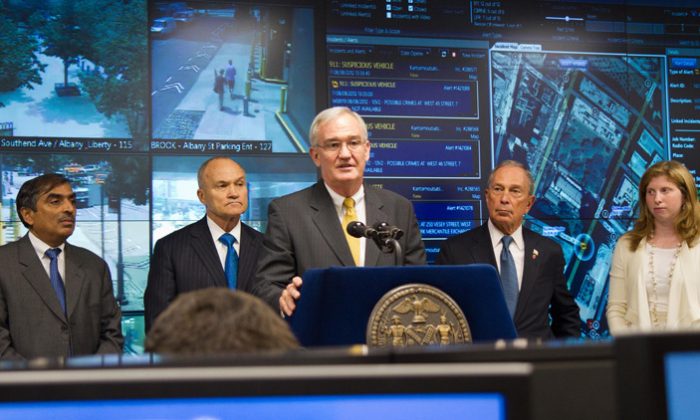 NYPD Teams Up With Microsoft to Fight Crime

NEW YORK—Microsoft and the New York Police Department (NYPD) have teamed up to create an all-seeing crime fighting system: the Domain Awareness System.

The NYPD has been coordinating with Microsoft on and off for a number of years on this project, which cost an estimated $30 million to $40 million, officials said.

For bomb threats, radiation detectors will set off alarms alerting the command center. The new technology provides information on whether the radioactive material is a harmless isotope used in medical treatments, a weapon, or occurring naturally.

Factsheets of various radioactive elements are available in the system, listing the elements’ origins, common uses, and quantity needed to become dangerous.

“We’re not your mom and pops police department anymore, we are in the next century,” Mayor Michael Bloomberg said at the press conference.

If a suspicious package is found, with one click, the system can bring up all cameras within 500 feet of the incident, and instantaneously show footage from 30 seconds prior to the call.

Investigators can also track where a suspect’s car is located, and where it has been in past days, weeks, or months.

Every time a license plate reader scans a plate, the plate is sent to the domain system and compared with existing lists of terrorism suspects and other investigation cases.

Investigators can map criminal history, to geographically and chronologically reveal crime patterns. With two clicks, the system can get reports about a particular crime, person, or precinct—saving officers time from going back to check silo databases.

Although the technology was revealed Wednesday, the NYPD has been using it for six months.

Microsoft is working toward selling this system to other governments in the United States and worldwide. The city will receive 30 percent of the future sales, which will go toward more counterterrorism and crime-prevention programs.

Technology has come a long way for the NYPD in the last decade. “When I came back to the police department in 2002, I found out that the department was still a big user of whiteout and carbon paper,” Kelly said.

While the new system may be a breakthrough for the NYPD, Christopher Dunn, associate legal director of the New York Civil Liberties Union, feels otherwise.

“We fully support the police using technology to combat crime and terrorism,” Dunn said in a statement. “But law-abiding New Yorkers should not end up in a police database every time they walk their dog, go to the doctor, or drive around Manhattan.”

“The NYPD’s massive surveillance systems should have strict privacy protections and independent oversight,” he said.