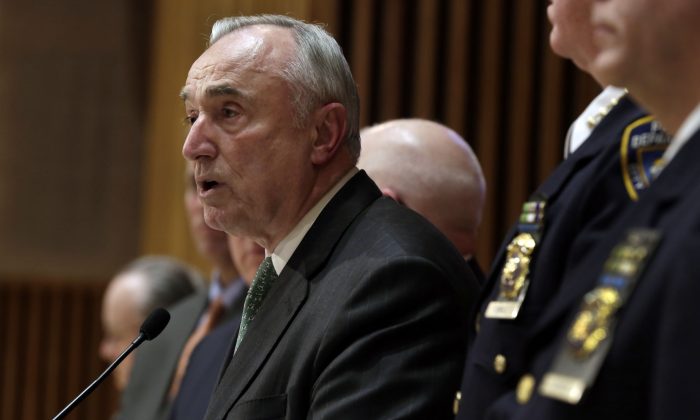 NEW YORK—New statistics show that New York Police Department officers are starting to make more arrests after a suspected work slowdown at the start of the year that further exposed tensions between the rank and file and Mayor Bill de Blasio, officials said Monday.

At a news conference, Police Commissioner William Bratton said the 4,690 arrests made last week across the city were still down significantly—37 percent compared with the same period last year. But it was an improvement compared with the 2,401 arrests in the week ending Jan. 4, which had represented about a 60 percent drop.

“With each passing day, with each passing week, those numbers are going back up to what we would describe as normal. … The cops are beginning to do what’s expected of them,” Bratton said.

Ticketing for traffic and parking violations and other low-level infractions, which had virtually ground to a halt, also were starting to edge upward, officials said. And despite the apparent slowdown, reports of homicides and other serious crimes also were down in the first two weeks of 2015, they added.

Union officials, who met behind closed doors with Bratton last week, have denied the dramatic decline in enforcement reflected a sanctioned work stoppage. But the numbers were seen as evidence of growing rancor between police officers and de Blasio in the aftermath of the slayings of two patrolmen, and prompted Bratton to put commanders on notice that they needed to step up enforcement activity.

The two officers were killed Dec. 20 in a brazen daytime ambush by a mentally unstable man who vowed online to kill two “pigs” in retaliation for the deaths of black men and boys at the hands of police around the country. Police unions have accused de Blasio of contributing to anti-police sentiment by supporting protests over the police killings.

Earlier Monday, de Blasio said he was confident that police officials were taking the proper steps to ensure public safety and to reverse the downward trend in arrests.
“By definition, every public servant needs to do their job,” the mayor said. “But I think, in the interest of moving us forward, they have taken the right approach, and we’re seeing good results.”

Patrick Lynch, president of the powerful Patrolmen’s Benevolent Association and one of the mayor’s harshest critics, declined to comment through a spokesman.