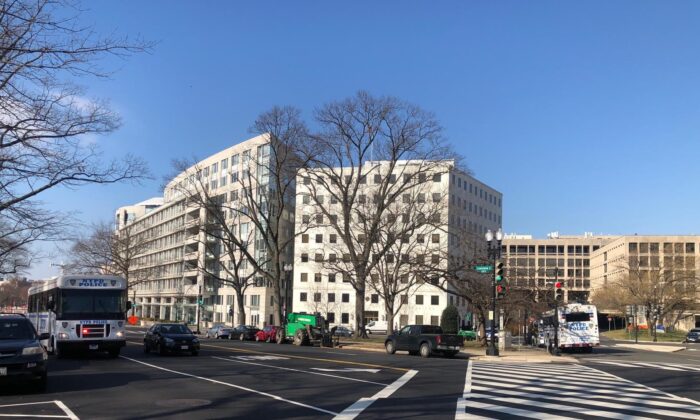 WASHINGTON—Some 100 police officers from New York have arrived in Washington to help the U.S. Capitol Police with security for President Joe Biden’s State of the Union.

At least five buses transported the officers to the nation’s capital, where they were sworn in at the Capitol Police headquarters, an officer who declined to be named told Epoch Media Group.

Officers aren’t sure how long they’ll be in Washington.

An NYPD spokesman told The Epoch Times in an email that the department sent approximately 100 officers because the Capitol Police requested them “for the upcoming State of the Union.”

The NYPD is “one of the outside agencies here to help ahead of” Biden’s speech, which is scheduled to take place before a joint session of Congress, a Capitol Police spokesperson added.

The requests for outside help were made because some law enforcement partners couldn’t help at this time because they are preparing for potential convoys arriving in the region, according to the spokesperson.

One major convoy passed into Missouri on Monday while another planned to leave from New England on March 2.

Most convoys appear poised to arrive after Biden’s speech.

An organization called the KNK Foundation, which could not be reached for comment, applied for a demonstration permit for March 1 on the Sylvan Theater that they said would speak out against COVID-19 vaccine and mask mandates, and in support of convoys, according to a copy of the application obtained by The Epoch Times. The group’s Instagram page says it is a nonprofit that wants to support convoys arriving in Washington.

The permit has not yet been issued, a National Park Service spokesman told The Epoch Times.

Authorities in Washington approved and re-erected fencing around the Capitol over the weekend as the U.S. Capitol Police prepare to prevent disruptions to the work of Congress and the State of the Union.

U.S. Capitol Police Chief Tom Manger said his agency has “been working closely with our federal, state and local law enforcement partners on a security plan” and that he “requested support from outside law enforcement agencies as well as the National Guard to assist with our security precautions.”

Defense Secretary Lloyd Austin earlier in February approved the deployment of some 400 National Guard personnel to Washington to help direct traffic. The members won’t be armed or assist law enforcement, according to the military.

Maryland and Virginia authorities have confirmed they’re in touch with partners regarding the convoys, and the White House says they’re tracking the demonstrators.