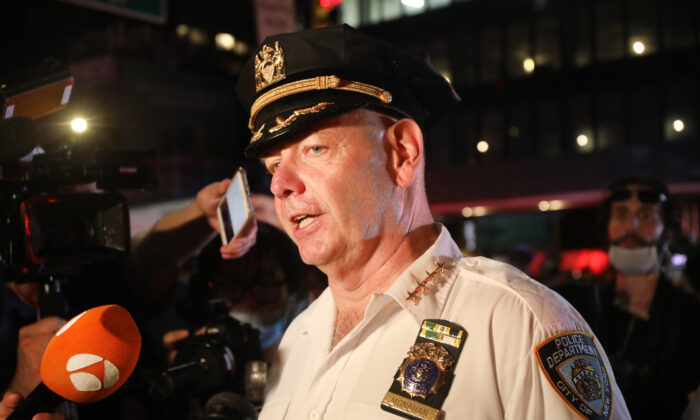 NYPD Puts Rioters and Agitators On Notice Ahead of Election Day: ‘We Will Be On Them’

The New York City Police Department (NYPD) issued a stern warning to known looters and agitators ahead of Election Day, with a top official saying those who would seek to hijack potential peaceful protests in the wake of the election would be met with a tough police response.

In a message on Twitter, NYPD Chief of Department Terence Monahan said that police have ramped up their presence ahead of Election Day in a bid to keep the peace should anything go amiss, noting that officers would, “as always, facilitate peaceful protest and stop anyone who wants to cause violence or destruction.”

“There is certainly no shortage of coverage for this year’s election. Some of it may seem concerning to New Yorkers but make no mistake, the NYPD will be out ensuring the safety of all people and property,” Monahan said. “We have thousands of additional cops at the ready.”

“The NYPD is fully prepared to protect every person’s right to vote on Election Day,” he said, adding, “So please, feel safe while you cast your ballot.”

Calling the outbreak of looting and property damage that took place in New York City in the context of George Floyd protests “a once in a lifetime occurrence in the city,” Monahan warned known looters and rioters that authorities would be keeping a watchful eye.

Monahan then addressed “regular, peaceful protesters out there,” and urged them to be watchful of activity that spirals into violence or property damage.

“If anything should ever start to turn ugly, if something started to get thrown, that’s a time to leave when you’re a peaceful protester. Separate yourself from those who are willing to cause destruction and damage. We’ll take care of them,” he said.

Dermot Shea, Police Commissioner of New York City, said in an Election Day tweet that, “Today, as they do every single day, thousands of your NYPD cops will be out there, too, preserving the peace, protecting NYers, and ensuring that everyone is heard and their vote counted.”