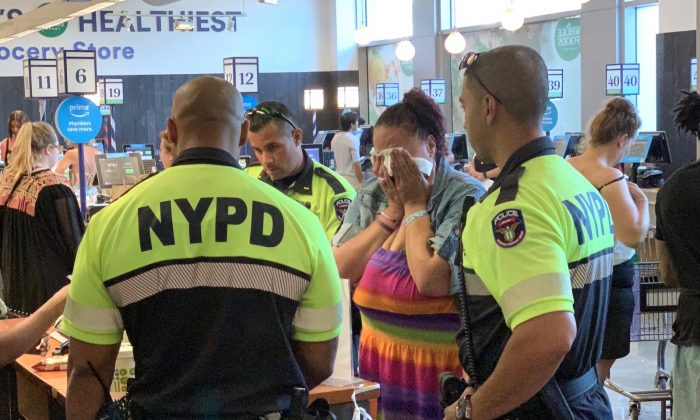 NYPD police officers did not arrest a woman who was accused of shoplifting food, but instead paid for the food at a Union Square Whole Foods store in New York, on July 4, 2019. (Paul Bozymowski @pboz/Twitter)
NY News

She was moved to tears
By Mimi Nguyen Ly

When New York City police officers went to a Whole Foods store in Union Square on July 4 to buy some food because they were hungry, they found security holding a woman who was accused of shoplifting.

Instead of arresting her, the three officers decided to pay for the food.

A witness shared on Twitter what he’d seen at the store. Paul Bozymowski, who is a film and TV director, had taken a photo at the cashier area of the store that shows the woman, visibly touched by the policemen’s gesture, covering her face with a tissue.

This woman was being held by security.
She had food in her bag she didn’t pay for.
When the NYPD showed up, they paid for her food.

“This woman was being held by security. She had food in her bag she didn’t pay for,” he wrote on Twitter. “When the NYPD showed up, they paid for her food.”

The New York Post reported Bozymowski recalling the incident: “I saw the woman opened up her bag, and one of the officers looked in the bag. And [the cop] said ‘I’ll buy your food,’ just really simply and plainly.”

He said the woman then began to cry, adding that she was “just overwhelmed with gratitude” for the officers.

The NYPD later confirmed the story in a Twitter post, and the officers have since been identified as Lt. Louis Sojo, and officers Esnaidy Cuevas and Michael Rivera, of the Strategic Response Group.

“We knew we should be doing the right thing by her.”

You may recognize these officers from a recent tweet from @Pboz. Listen to them explain their heartfelt actions and that they didn’t realize they were being photographed ➡️ https://t.co/d1gtZ7wpqZ pic.twitter.com/RVANQ9PCDj

At a press conference on July 5, Lt. Sojo recounted how he had asked the woman “What’s going on?” to which she replied she was hungry.

When asked about what they saw, Sojo said he saw what he thought was from the ready-to-eat hot food buffet, and that the food cost between $30 and $35.

He recalled that the security guard who had held up the woman was then “completely shocked” by the remark.

When the officers then escorted the woman to the cashier, the cashier also thanked them for paying for the woman’s food. At that point, the woman was speechless, Sojo said.

Sojo added that the three really did not expect that the incident would garner so much attention.

NYPD Chief Terence Monahan, writing on Twitter, said that the three officers “are the kind-hearted cops who quietly do good deeds for New Yorkers in need. He also thanked Bozymowski for capturing a moment that is “often unnoticed.”

Cops like Lt. Sojo and Officers Cuevas and Rivera of the Strategic Response Group are the kind-hearted cops who quietly do good deeds for New Yorkers in need. My thanks to @pboz for highlighting the often unnoticed. https://t.co/gbsjkx3iVE