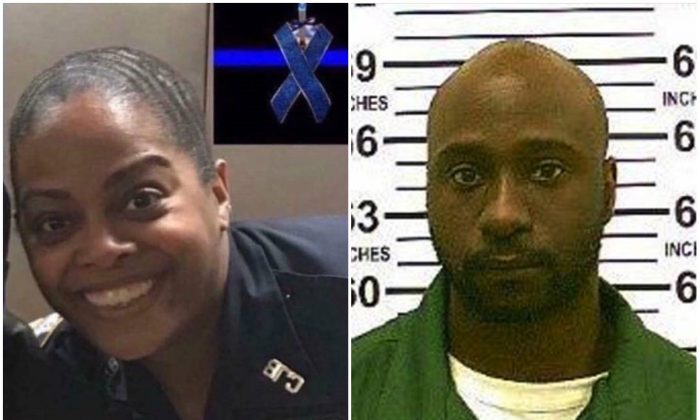 A New York City police officer was fatally shot in an unprovoked attack on early July 5 morning. The gunman was killed by police.

The officer, a 12-year veteran Miosotis Familia, 48, was sitting in a police van near the corner of Morris Avenue and East 183 Street in the Bronx at 12:30 a.m. when a man, identified as Alexander Bonds, approached the van and shot one round in the window striking Familia in the head. Another officer inside the van immediately called for medical help. Familia was rushed to St. Barnabas Hospital where she died.

Two officers chased after the gunman, who brandished a silver revolver and was then shot by the officers. An innocent bystander was hit in the stomach during the shooting, was treated, and is in stable condition. It is not clear who’s bullet hit the bystander.

“Let’s be clear. This was nothing less than an assassination of a police officer. Our understanding is she was filling out her memo book and he walked out and fired one round,” a police source told The New York Daily News.

Bonds was on parole for a robbery in Syracuse.

Familia was a mother to a 20-year-old girl and twin 12-year-olds, a boy and a girl. She used to be a nurse and a Red Cross worker before joining the force, The Daily News reported.

Last year, 66 law enforcement officers were shot dead in the country, up more than 50 percent from the previous year, according to the National Law Enforcement Officers Memorial.

Familia’s death is a reminder of December 2014 when two NYPD officers, Wenjian Liu and Rafael Ramos, were ambushed while sitting in their patrol car and shot dead by a man who had pledged to kill police.

“Violence against police officers cannot stand. When you see or hear someone making threats against NYC police officers you need to let us know, you need to be our eyes and ears,” said Patrick Lynch, president of the city’s police union, NYC Patrolmen’s Benevolent Association, in a statement.

“Police Officer Familia now joins the exclusive ranks of women who have heroically served and died in the line of duty,” the statement read. “We will keep her in our hearts and minds as we do all of the women and men who have made the ultimate sacrifice for the city they loved.”