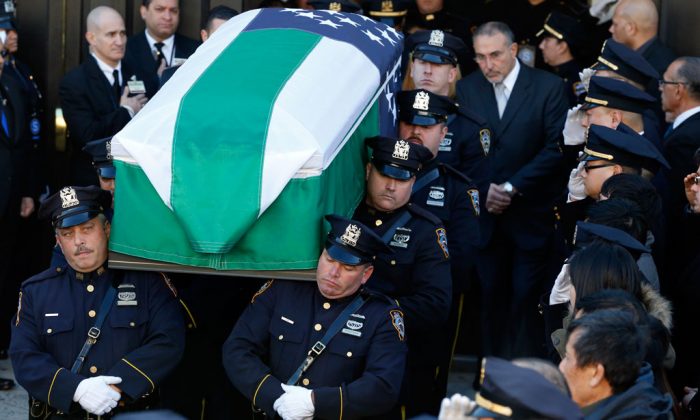 Ramos and officer Wenjian Liu were shot and killed in their police car in Brooklyn by 28-year-old Ismaaiyl Brinsley from Baltimore, Maryland, who then killed himself. The unexpected double assassination shook the NYPD. Heightened security measures were brought in to deal with the increased threat, including doubling up on patrols and extra protection for precinct offices.

Liu’s funeral will be held after his family members in China obtain visas.

The NYPD protected the right of freedom of speech even though they themselves were the target of false and abusive chants and tirades by some.
— NY Gov. Andrew Cuomo

“When an assassin’s bullet targeted two officers, it targeted this city and touched the soul of the entire nation,” said Biden, speaking at the service.

Police Commissioner William Bratton reflected on the incident solemnly Saturday during a funeral speech. He spoke of how Brinsley had viewed Ramos and Liu as “two uniforms, but they were so much more than that.”

The tragedy had come after weeks of divisive politics, said Bratton. In the current climate, “we don’t see each other.”

“If we can see that our cops are people, see that our communities are filled with people like them too, then when we see each other, we’ll heal,” he said.

Mourners Attend Funeral for NYPD Officer Ramos, Who ‘Touched the Soul of an Entire Nation’

“And wouldn’t that be the ultimate honor for officers Ramos and Liu? That their deaths would help us heal.”

The divisions were still on display on Saturday. When Mayor Bill de Blasio spoke, no officers outside the church clapped for him. Later when the mayor exited the church, walking past crowds of police officers, some officers kept their backs to him. Several NYPD officers declined to comment.

“I hope for reason to come about,” said Josh Pace, a California state park peace officer and lifeguard, “people to think critically and not act on emotion. It’s a big divide between police and citizenry it seems like right now.”

New York City has seen weeks of protests against police brutality following decisions not to indict white police officers in Ferguson, Mo. and in Staten Island for murder in the deaths of black, unarmed men. Brinsley cited the black men on his social media posts, just before shooting Liu and Ramos.

“The NYPD protected the right of freedom of speech even though they themselves were the target of false and abusive chants and tirades by some,” said Cuomo. “What a beautiful testament to their professionalism.”

Police officers inside the church, and the thousands crowded outside responded with sustained applause.

“It was a beautiful ceremony,” said Theresa Nichiporuk, a sergeant who is part of campus patrol at the Bronx Community College, “I think Governor Cuomo’s speech was outstanding.”

I have 21 years, so I don’t want to be at another funeral.
— Police patrolman from Garden City, Long Island

Outside the small church in the Glendale section of Queens were many thousands of mourners who could not fit indoors.

At the center of the scene were the American flag, the New York State flag, and the Police Flag, with white stars on blue, and green and white stripes. Uniformed officers lined the streets, some wiping their eyes and noses discreetly, and bystanders gathered in crowds.

Neighbors in the building across from the church looked on at the ceremony. A man holding a baby called multiple people to the window to look.

A trumpeter played “America the Beautiful” and the loud growl of at least ten police helicopters flying overhead was audible throughout.

When the ceremony finished, Ramos’ body was brought out, and the hearse drove off, followed by 260 motorcycles and streams of ambulances and public buses reserved for officers. The NYPD Emerald Society bagpipers marched to a drum beat at the end of the long procession. Ramos was laid to rest at Cypress Hills National Cemetery in Brooklyn.

“Any cop anywhere—a piece of them died today,” said a patrolman with the surname Marceda, who attended the funeral with other Garden City, Long Island police colleagues. “I have 21 years, so I don’t want to be at another funeral. Hopefully, I never have to be at another one.”

Marceda formerly worked for the NYPD for twelve years.

“It’s truly a sad day for all of us. When one mourns, we all mourn,” said Roy Omess, a sergeant with the Westchester County Department of Correction who attended with his honor guard unit. “It just opens your mind that it could happen anywhere and to anyone.”

John Branson, a lieutenant from the Anderson, Ind. police department, said he could identify with Ramos and Liu, who were shot without warning. He reflected that often he lets his guard down at work, especially when taking a break at a store, “because the majority of people we deal with are very good people.”

“But there’s always that one lone wolf that could hurt you,” he added.

Ramos had joined the police force at age 37, with more experiences and worldliness than the other younger recruits who looked up to him, said Bratton, speaking at the ceremony.

When he died, he had been undergoing ten weeks of training to become a chaplain. He worshipped at the church where his funeral was held.

Bratton named Ramos honorary department chaplain for the 84th Precinct where he had served. Both Liu and Ramos, who had been patrolmen, were posthumously promoted to first-grade detective.

“We need people like this,” said retired NYPD third-grade detective Graham Weatherspoon, 65, who resides in Crown Heights, Brooklyn. “Everybody is valuable. We’re losing too many people to unwarranted violence.”

Weatherspoon brought his granddaughter, Jay, 12, who was visiting from Texas for the holidays, to the funeral. “I thought it was important for her to see this. This is like a throwback to the seventies. When I came on the job, cops were being killed every month.”

Jay Weatherspoon said she wants to join a K-9 unit working with police dogs when she grows older.

“I decided to save other people’s lives,” she said. “If my life gets taken, at least I’ll die with honor.”