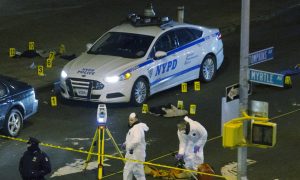 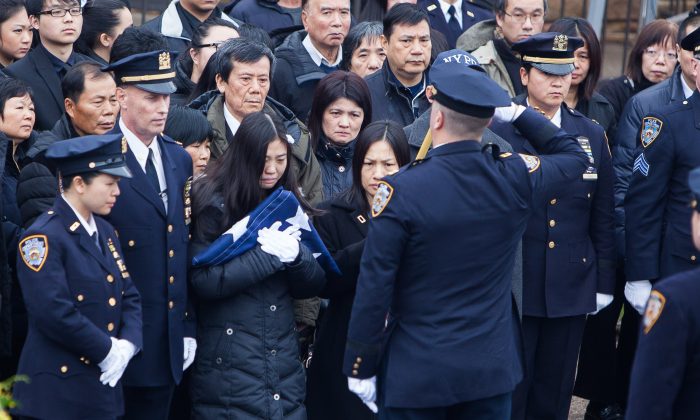 NEW YORK—Throughout the day, the rain held steady, at times relentlessly pouring down the streets lined with thousands of police officers from across the country.

But the ceremony must go on. After heartfelt eulogies and a meticulously arranged funeral procession done in the police tradition, NYPD officer Wenjian Liu, who was shot and killed in Brooklyn two weeks ago, was finally laid to rest on Sunday afternoon.

Liu and his partner, Rafael Ramos were shot in the head while sitting in their patrol car in Bedford-Stuyvesant, Brooklyn. Ramos’s funeral took place last weekend.

From the eulogies given by Liu’s family members, Mayor Bill de Blasio, and Police Commissioner William Bratton, 32 year-old Liu was a humble, hard-working man who cared deeply for his family.

Liu, who emigrated from China at age 12, first attended college hoping to become an accountant. But after 9/11, he set his dreams on becoming a police officer.

“He could have turned away. He could have said it wasn’t worth it. Instead, four months later, he took the oath to become a New York City police officer,” said Police Commissioner Bratton. The remarks were broadcast over a jumbotron outside the Ralph Aievoli & Son Funeral Home in Bensonhurst, Brooklyn, where the family held a private Chinese Buddhist funeral ceremony.

He could have turned away. He could have said it wasn’t worth it. Instead, four months later, he took the oath to become a New York City police officer
— Police Commissioner Bratton

A number of national, state, and local officials also attended the funeral, including FBI director James Comey, U.S. Senator Chuck Schumer, and New York City Council Speaker Melissa Mark-Viverito. Governor Andrew Cuomo was scheduled to deliver remarks at the funeral, but could not attend due to the recent passing of his father, former governor Mario Cuomo.

Liu was passionate about his career because he loved to help others. “His greatest joy came in sharing with others, came in caring for others—helping, supporting, devoting himself to something greater than himself,” said Mayor de Blasio.

The mayor went on to describe a time when Liu was assigned a routine visit to assist an elderly man who had taken a fall. After Liu lifted the man from the ground, he stayed behind to listen to the man recount his days serving as a pilot in the Vietnam War, before tucking the man into bed.

Before his death, Liu had served in the NYPD for seven years, patroling Brownsville and downtown Brooklyn.

To his widow, Pei Xia Chen, Liu was her soul mate, her best friend, and her hero. Chen and Liu had gotten married only two months earlier. In her remarks, Chen described Liu as a man of many passions, including for nature and the outdoors. Liu often told her about his work, “how much respect he had for the law, how he applied the law,” Chen said.

Liu’s father, Wei Tang Liu, said his son fulfilled his filial responsibilities, taking his father to the doctor when he fell sick, or picking him up from work at the garment factory. “You are the best son,” Liu’s father said.

Many police officers across the country traveled to Brooklyn to pay their respects. Christian Larsen, who serves the Maricopa County sheriff’s office in Arizona, said the tragedy reminds him of the dangerous work they do. “Signing up for this job, we’re not promised tomorrow, but it’s for the greater good to help people,” he said.

Officer Daniel Bernal, from the Chicago police department, had similar sentiments. “Once you put the uniform on, you can be a target. That’s the scary part,” Bernal said.

Officer Rick Hassell, who left the NYPD 11 years ago and now works in the Suffolk County police department in Long Island, said some of the community tensions with police stems from the fact that people don’t like to be punished for breaking rules.

Hassell remembers a time after 9/11 when many New Yorkers praised the NYPD. “As time goes, the memories fade, and then they’re right back to, ‘oh, those are cops out there writing tickets again,’ and they hate you,” said Hassell, who patrolled the Bedford-Stuyvesant and Brownsville areas for 11 years. “But that’s part of the job. If you let that get to you, you shouldn’t be a cop.”