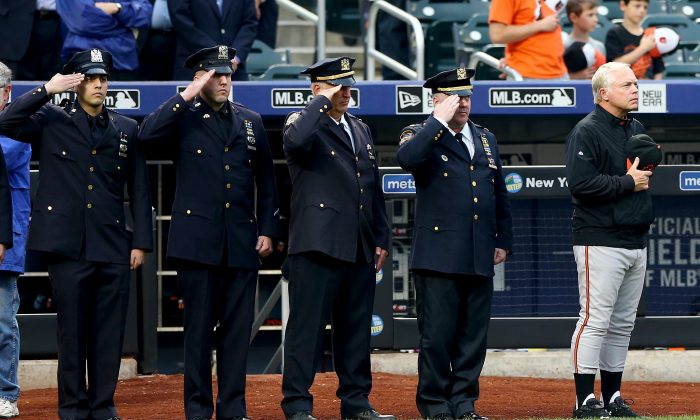 Tragically, flags fly at half-staff once again in New York City, this time to honor the passing of NYPD Officer Brian Moore, an American hero.

All of New York City must mourn, along with Officer Moore’s family, the NYPD, law enforcement brothers and sisters everywhere, and all who love America. The flags that fly at half-staff must be present in our hearts and souls.

Sentiments of devotion including cards, candles, and flowers are being left to honor Officer Brian Moore at the 105th Precinct where mourning bunting solemnly hangs at the entrance. The flame from each candle must ignite compassion in our hearts and inspire us to pause, reflect, and pray.

Another tragic death of a police officer must not be in vain, but serve as a clarion call not only to all New Yorkers but all Americans. America must appreciate the service of dedicated men and women protecting our communities in a dangerous profession deserving of honor.

These are challenging times, as we see unfold a culture of violence compounded by contemptuous anti-police sentiments. America’s police are guardians of safety and the lifelines of security in our communities. Respect, courtesy, and appreciation for all who protect and serve must be enhanced.

Unfortunately, NYPD Commissioner Bill Bratton is becoming all too familiar with officers making the ultimate sacrifice.

Complementing the eloquence and compassion of Commissioner Bratton, the courage, honor, and service of this fine young officer represents the best of our country and is also a great loss to America.

Officer Brian Moore was 25 years old and appointed as an NYPD officer in July 2010. He was a lifelong resident of the Massapequa, Long Island, community.

Both his father and uncle were retired NYPD sergeants and he has a cousin also on the force.

Moore was an exceptional professional with a promising career. Although an officer for less than 5 years, Officer Moore had over 150 arrests and received numerous service awards.

His death comes just months after the deaths of NYPD officers Wenjian Liu and Rafael Ramos. These men, along with Officer Moore, are also heroes lost too soon while protecting and serving the people of New York City.

The challenges for those safeguarding America’s communities through law enforcement are very arduous and deserve the appreciation of all who benefit from their sacrifices.

Every citizen should be truly grateful for their service and do everything humanly possible to express appreciation through acts of encouragement, thoughtfulness, service, and respect.

Aside from fatalities, over the last decade, there is an average of nearly 60,000 assaults against police officers, resulting in 16,000 injuries each year.

For the NYPD, the danger is sobering as the department has lost more officers in the line-of-duty than any other, with over 700 fatalities.

As of May 2015, there have already been 37 police fatalities nationwide with 9 of these as firearms-related.

As Officer Brian Moore is laid to rest, his passing must ignite a fire of compassion, respect, and appreciation in the hearts of all privileged to call New York City and America their home.

It is time to forever honor Officer Brian Moore and all law enforcement officers across this great land who make us proud through their sacred oath to protect and serve.