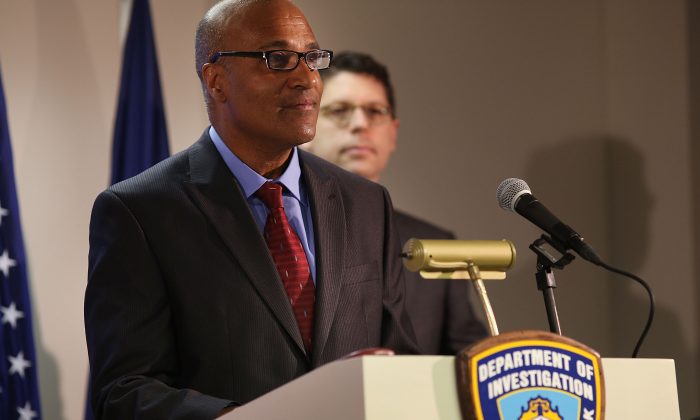 Philip Eure at a news conference as he is named the new inspector general for the New York Police Department (NYPD) in New York City on March 28, 2014. (Spencer Platt/Getty Images)
New York

NEW YORK— The website for the much awaited Office of the Inspector General for the New York Police Department (OIG-NYPD) was launched on Monday, providing an extensive introduction of the functions and services of the agency to the public.

The OIG-NYPD was created by the City Council last year—in a bill that overrode then mayor Michael Bloomberg’s veto—to augment the oversight on the police provided by the Civilian Complaint Review Board in a more systematic fashion, or as mayor de Blasio put it, “to look at the big picture.”

The office, according to the website, will review complaints en masse to “identify trends,” investigate cases of police misconduct, and “make recommendations” to improve the effectiveness of the NYPD.

The office, which operated under the city’s Department of Investigations, is headed by Philip K. Eure, who previously headed Washington D.C.’s Office of Police Complaints and had a decade long stint in the U.S. Department of Justice, working in the Civil Rights Division.

As part of a series of initiatives aimed at quelling the tensions between the police department and minority communities in New York City, the office has been referenced many times by the mayor in the earliest stages of development, which is set to finish by the end of 2014.

“There’s a lot of different moving parts here. We now have a very robust oversight dynamic vis-à-vis the NYPD,” the mayor said in late June, answering why the Inspector General would not take a direct part in the Eric Garner case.

“For the first time in many ways, I would say in New York City history, we have a complete and robust oversight dynamic.”

The website’s FAQ provides an address to which New Yorkers can submit written complaints about police misconduct, and assures that the usual protections that whistle blowers receive apply.

Still in development, the office advertised employment opportunities at the end of the FAQ, including positions for “investigators, attorneys,” data and analysts, and outreach specialists.