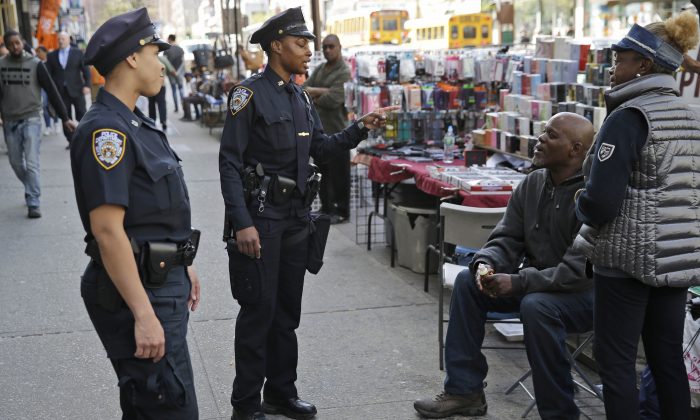 “It is not an expert study,” he said of the Office of Inspector General’s (OIG) June 22 report. “It is deeply flawed. It is of no value at all.”

The report questions Bratton’s quality-of-life policing, which is part of the Broken Windows theory—a central part of the NYPD’s operation and lauded by Bratton as highly successful. The theory holds that by focusing on lesser (quality-of-life) crimes, more serious crime is prevented; at the same time, an atmosphere of order is created that deters further crime.

The OIG report looked into the statistics for quality-of-life crimes and found “no empirical evidence demonstrating a clear and direct link between an increase in summons and misdemeanor arrest activity and a related drop in felony crime.”

But, the NYPD argues, no such “clear and direct link” should be expected.

Most quality-of-life policing is not motivated by Broken Windows, but in response to 911 and 311 calls, the NYPD said in its report answering to the OIG report. The NYPD report, released on Sept. 7, includes a map showing high concentrations of 311 and 911 calls for disorderly persons, noise, and drinking, which correlate with hotspots for criminal summonses issued in 2014.

But the OIG also criticized NYPD for being heavy-handed—especially in minority communities—and the NYPD said it’s now adapting the quality-of-life strategy to be less draconian.

When Bratton landed his first stint as NYPD Commissioner in 1994, he adopted Broken Windows policing.

At the time, the city was plagued by crime carried over from the crack epidemic of the 1980s. The department started arresting people and issuing summonses for minor offenses to break up crime hubs on street corners, to prevent drug distribution, shootings, and other serious crimes.

Later, researchers questioned to what degree Broken Windows policing was responsible for the crime drop, since crime rates dropped across the nation, including in cities that adopted different approaches.

The drop in New York City, however, was among the steepest nationally and Broken Windows was lauded as, at least, a significant contributor.

Bratton also attributes the reduction of crime to the introduction of CompStat, a database and analytics program.

CompStat was, in part, introduced to help police discern crime patterns and develop counter tactics, according to the NYPD report. But, it was the misuse of CompStat that the NYPD blamed for problems with Broken Windows.

CompStat was supposed to spur more police activity, but not “for its own sake,” the NYPD report states, yet “the message became muddied, as field supervisors and officers began to see arrests and summonses as the measure of effective performance.”

And, the OIG said, high numbers of summonses and misdemeanor arrests come at a price.

“The cost is paid in police time, in an increase in the number of people brought into the criminal justice system and, at times, in a fraying of the relationship between the police and the communities they serve,” the OIG report states.

The NYPD report acknowledges “the level of police intervention represented by arrests was leaving an impression of heavy-handed police tactics in some minority neighborhoods.”

Bratton is now seeking solutions through the strategies of “precision policing” and neighborhood policing.

Precision policing targets the most serious and notorious offenders and breaking down entrenched crime structures, like mobs and gangs.

Neighborhood policing means officers don’t rotate throughout the city, but stay in one community and are encouraged to learn how the community works and get to know the residents.

Broken Windows will stay, but police should mainly target offenders whose conduct is likely to escalate into a more serious crime, Bratton said. Officers should also show more discretion and opt for softer enforcement methods, like warnings, wherever possible.

A neighborhood policing strategy should help officers make those decisions. If the officer already knows, for example, that a certain rowdy person drinking on the street has a history of violence, the offender may still get a summons or get arrested for public drinking—the assumption being he would otherwise likely get into more serious trouble. On the other hand, a man sitting in front of his house drinking beer after a long day at work may only get a warning.

The department already has some evidence of the change. Quality-of-life misdemeanor arrests, for example, dropped by about a quarter between 2014 and 2015 and the decline continues in 2016.

The change, however, requires altering the culture inside the NYPD, Bratton said. “We have a generation of police officers that were pointed in one direction—we’re now trying to point them in a different direction and that’s the challenge.”