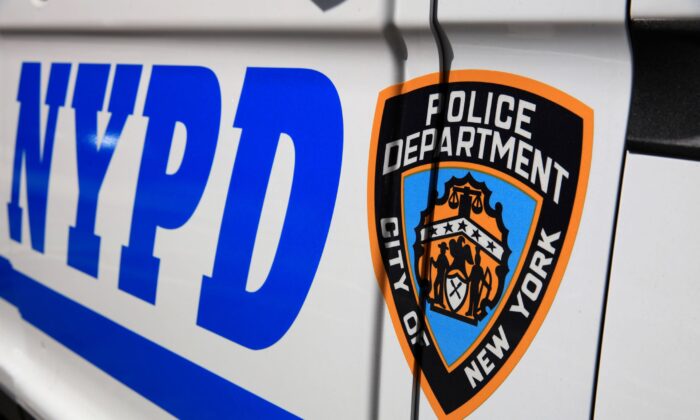 The side of a police patrol car in New York in this undated photo. (Bernhard Richter/Dreamstime/TNS)
Crime and Incidents

NEW YORK—An often-sued NYPD officer with an extensive history of misconduct allegations has been indicted on charges that he re-enacted finding a gun in a suspect’s car so he could record the discovery with his body camera.

Officer Kevin Martin, 45—the subject of 34 misconduct complaints and at least a half-dozen civil suits that cost the city more than $1 million in settlements— was indicted Wednesday and charged with tampering with evidence and official misconduct.

The charges stem from a March 1, 2019, car stop by Martin and his partner, Officer Matthew Puleo, while they were on patrol in the 109th Precinct in Queens, according to a criminal complaint. Both were given body cameras.

They pulled over a suspect’s Jeep during a traffic stop, seized the vehicle, and found drugs in the suspect’s possession—but the body cam footage showed no contraband in the car.

Puleo went back on patrol as Martin processed the arrest and at the end of the night, when his partner returned, Martin asked for help bringing in evidence from inside the Jeep.

That’s when Martin apparently found a defaced .22 caliber handgun stashed in a sneaker, the complaint said. He’d already taken off his body cam, so he went back to get it, then, as Puleo watched, he staged finding the gun again so he could have a video record, according to the complaint.

Months later, Puleo told the Queens D.A.’s office the video was a “re-enactment,” but Martin stuck to the ruse, the complaint alleges.

The stunt broke the chain of custody, and it would have illegally stacked the deck against the suspect if no one had found out, according to prosecutors.

Martin was arrested in 2020 after an investigation by the NYPD’s Internal Affairs Bureau.

He was arraigned on the indictment in Queens Supreme Court and released without bail, and could face up to four years behind bars if convicted at trial. His lawyer, Stacey Richman, denied the charges.

“With the light of trial, the jury and the public will see that Officer Martin was properly serving our city as he has done for his entire career,” Richman said.

Martin, a 16-year NYPD veteran, has been hit with departmental disciplinary charges for unlawful stop and frisks, making misleading statements to the Civilian Complaint Review Board, and being discourteous and insubordinate to a lieutenant who ordered him to stop working overtime.

The lawsuits against Martin typically involved false arrests, mostly for marijuana and low-level drug charges. In one federal case settled for $155,006, six different plaintiffs—including freelance TV reporter Francisco Zapata—argued that Martin and 11 other Bronx cops arrested them on bogus marijuana charges in 2011, claiming the drugs were in plain sight.

Zapata alleged Martin grabbed him off the street and threw him against the wall, refused to look at his press ID, and elbowed him three times in the head as he recovered weed from the reporter’s shirt pocket.