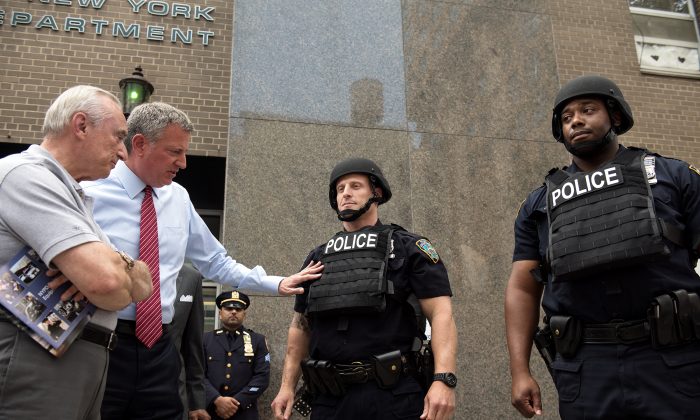 After recent killings of officers in Dallas and Baton Rouge, the New York City Police Department is investing millions into heavy-duty bulletproof vests and military-grade helmets.

The department is spending $7.5 million to buy 6,000 bulletproof vests and 20,000 helmets, said the city’s Police Commissioner William Bratton at a July 25 press conference.

The vests are designed to stop a bullet from an assault rifle, the type of weapon used to kill three officers in Baton Rouge, Louisiana, two weeks ago. The helmets are similar to those used by the U.S. military, Bratton said.

The extra gear is needed because regular NYPD patrol officers are expected to engage the shooter in an active shooter situation, rather that waiting for a SWAT team to arrive, said Bratton.

Officers will not wear the gear all the time. They will have it in their cars and wear it if they think they need it, Bratton said, noting the vests will be worn on top of the regular bulletproof vests officers wear under their uniform. The helmet alone weights some 7 pounds.

The equipment comes with training on how to put it on quickly.

Bratton said he was convinced they should get the gear after watching a video last week of an incident where two NYPD officers responded to a call about a possibly dangerous armed person. The officers came under fire immediately after exiting their car. The incident added to the heightened sense of danger among police after the recent attacks.

Since Bratton took his post 30 months ago, the NYPD has received close to $2 billion for new equipment, training, facilities improvements, and more.

The NYPD currently has about 34,500 uniformed officers, according to its website.