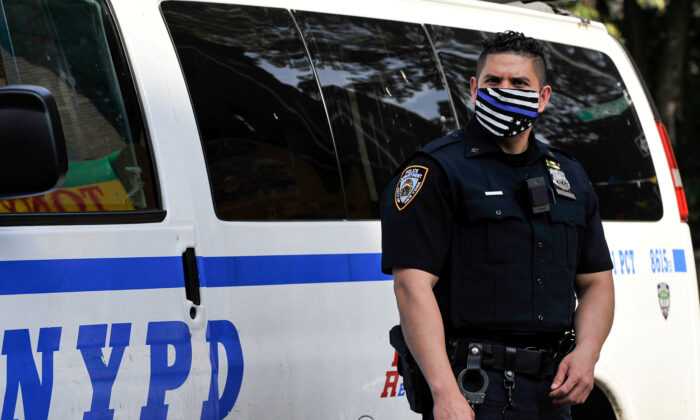 While New York City grabbed headlines by cutting its police budget by $1 billion, that’s not what the actual city budget says, according to the Citizens Budget Commission (CBC), the city’s fiscal watchdog.

The cut would seem larger, $474 million, if measured against an earlier budget proposal, the group noted. That’s how Mayor Bill de Blasio and the City Council chose to present it in their press releases. But even then, the cut falls far short of the billion mark.

Another $350 million was supposed to be shifted from the NYPD by transferring school officers and crossing guards to the Department of Education. But that shift isn’t reflected in the adopted budget, the CBC said.

“We expect the de Blasio administration to uphold its end of the deal that we agreed to in the budget, which includes NYPD-related savings, significantly reducing overtime and a commitment to move schools safety and school crossing guards out of the Department. Some of those changes will be reflected in a later Financial Plan,” said Jennifer Fermino, the City Council’s communications director, in an emailed response.

City politicians announced the cuts partly in response to a budget shortfall caused by the economic shutdown amid the COVID-19 pandemic and partly due to calls for defunding the police among the far-left, progressive Democrats.

The cuts come just as the city was hit by a wave of violent crime not seen since the mid-1990s.

More than 650 people were shot from June until Aug. 9, compared to less than 250 in the same period last year. Murder is up nearly 30 percent so far this year, NYPD data shows.

The problem is the result of multiple compounding factors, several current and former NYPD leaders previously said. First, the city passed a bail reform law that allowed more arrestees to be immediately released back onto the streets. Then the city locked down in response to the CCP virus pandemic, resulting in the shutdown of the court system, which created a backlog of cases. It then released hundreds from jails, saying it would mitigate the virus spread among inmates.

Finally, protests sparked by the death of George Floyd during his arrest in Minneapolis in May turned violent and fueled resentment toward police.

Recently, the city passed police use-of-force restrictions that threaten charges against officers if they even accidentally press their knee against a suspect’s back or chest during arrest. The law criminalizes several safe, nonviolent martial arts techniques used by police to subdue resisting subjects, according to police officers and other experts, who warned it will endanger both officers and suspects and will lead police to use more severe methods or even avoid arrests.

The actual NYPD cuts mainly consist of some $350 million in predicted overtime cuts.

That would be a 67 percent drop from the 2020 overtime budget.

“These savings are unrealistic; they were not accompanied by a plan or operational strategy, and prior efforts to reduce overtime at the uniformed agencies have been more successful in slowing growth rather than decreasing expenses,” the CBC said.

“The Mayor’s Office contends fewer events (such as parades) will result in less overtime for officers; however, these events comprised 25 to 30 percent of all uniformed police overtime spending in recent years, meaning overtime reforms would need to be far-reaching and potentially negotiated with labor unions to achieve the steep reduction currently budgeted.”

Moreover, the overtime cut only applies to one year. In 2022, the expenses would bounce back.

Most of the remaining cuts, $82 million, would be recurring and coming mostly from headcount reductions “attributable to cancelling the July Police Academy Class, freezing civilian hiring, reducing vacancies in Traffic Enforcement Agents, and moving the Homeless Unit out of the NYPD,” the watchdog said.

Update: The article has been updated with a response from the NYC City Council spokeswoman.