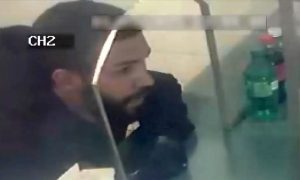 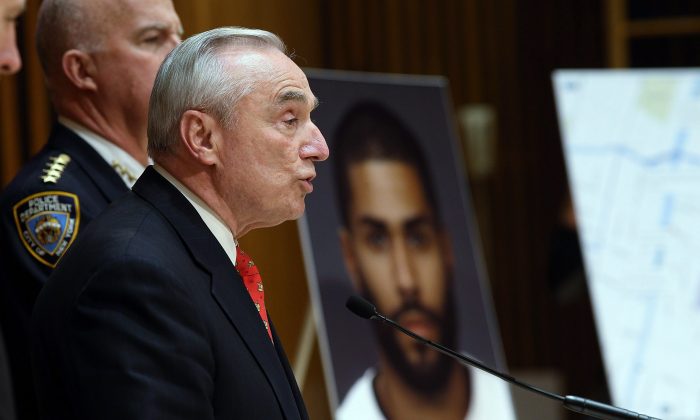 At around the same time, five police officers from the anti-crime unit of the 46th precinct had just ended their day and were about to change out of their uniforms, when they received a call from their patrol sergeant reporting a robbery nearby, said NYPD chief of detectives Robert Boyce at a press conference on Tuesday.

The officers got into their patrol car and began canvassing the area near the robbery. When they found two suspicious individuals, later identified as Kemp and Polanco, at a Chinese restaurant, the officers exited the car. Polanco saw the officers and fired one shot with his .44 Magnum caliber gun, striking his accomplice Kemp in the arm, as well as one officer.

Both officers were taken to St. Barnabas Hospital, where they are in stable condition. Pellerano is expected to be released from the hospital Wednesday morning, said NYPD commissioner William Bratton at the press conference.

As the other officers chased the suspects, one of them fired three shots. Polanco then carjacked a white Camaro and drove a short distance before crashing the car. He left the car and threw away his gun, at which point the police lost him.

Kemp later walked into the New York Presbyterian Hospital in Northern Manhattan seeking treatment, along with another individual who assisted him. Police then questioned Kemp, whose story fell apart, while the individual—who police believe is not involved in the crime—cooperated with the police investigation.

Kemp will be charged with commercial robbery, while Polanco will be charged with five counts of attempted murder of police officers, carjacking, and robbery, said chief Boyce. Polanco had three prior arrests for weapons possession—all cutting instruments, while Kemp had a long history of robbery and was recently released on parole.

The shooting came shortly after two police officers in Brooklyn were ambushed and shot in the head two weeks ago.

In response to the arrests, Patrick J. Lynch, president of the city’s largest police union, the Patrolmen’s Benevolent Association, released a statement Tuesday: “All of the thugs need to know that when you attack one of us, you attack all of us and that the NYPD will do all in its power to bring you to justice and to hold you accountable. We congratulate those officers on their speedy and excellent work.”

Mayor Bill de Blasio also expressed his admiration for the two officers through a statement Tuesday: “Last night a team of our officers displayed extraordinary bravery, going above and beyond the call to protect their fellow New Yorkers,” said de Blasio.