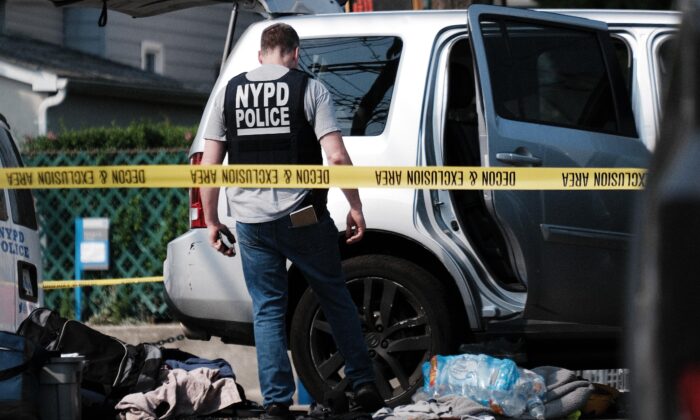 Police search a car following a stand-off in front of the 45th Police Precinct in the Bronx in New York City on July 8, 2021. (Spencer Platt/Getty Images)
Crime and Incidents

NYPD Arrests Down From 2019, Majority of Serious Crimes Up

New York City Police Department (NYPD) arrest activity has declined since 2019 and it doesn’t appear to be simply the effect of the COVID-19 pandemic. At the same time, the majority of serious crime types have increased, according to NYPD data.

NYPD arrests have been steadily dropping since 2014 and, for some time, crime was declining in tandem. The numbers particularly cratered with the onset of the pandemic last year, reaching a low of less than 7,500 in July 2020. Arrests have since rebounded, but not to the prior level. Instead, they seem to keep following the previous downward trend. Less than 75,000 have been arrested in the first half of this year, compared to more than 110,000 in the first half of 2019, the data shows.

Meanwhile, four out of the seven categories of serious crime tracked by the NYPD saw increases compared to 2019. Shootings in particular went through the roof.

Murders slightly declined this year versus the last, but are still nearly 40 percent above 2019.

There has been a lively debate on what’s the main factor behind the crime hike. There seems to be a whole host of factors in play.

The shooting wave started in May last year coinciding with protests and rioting in the city after the killing of George Floyd, a black man, during an arrest in Minneapolis.

Some officers previously told The Epoch Times officers may be reluctant to go out of their way to make arrests due to new policies that make arrests riskier and less consequential.

The city implemented new laws that banned judges from requiring cash bail for most nonviolent and some lower-level violent crimes, resulting in more criminals returning to the street after an arrest. Some officers called the policy demoralizing.

Last year, the state outlawed officers from placing a knee on a suspect’s back or chest as a restraint technique during an arrest. Police officers and experts have criticized the law for criminalizing martial arts techniques used to safely subdue resisting subjects.

During the initial pandemic lockdown, courts ground to a halt before resuming operations in remote mode, facing a backlog of cases. All staff and judges only returned to work in person in May. That means criminals out on bail have rarely faced conviction and imprisonment.

In addition, prosecutors have been twice as likely to drop charges against suspects last year than the year before, the New York Post reported.