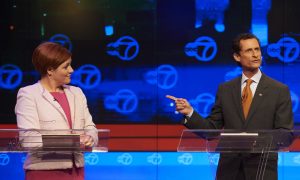 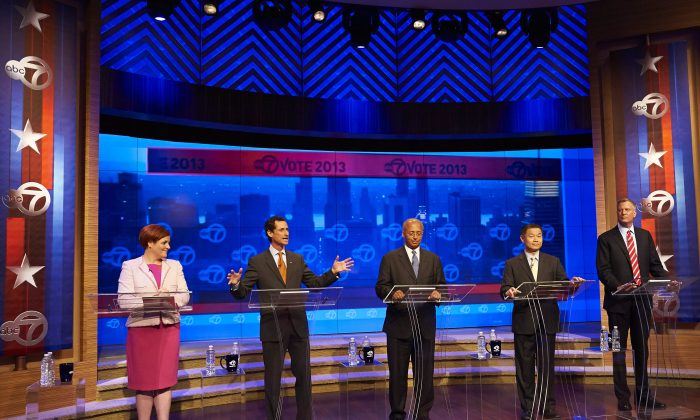 NEW YORK—On Aug. 13 the local ABC affiliate aired the first live Democratic mayoral debate on broadcast television. For many New Yorkers, it was the first time seeing the Democratic candidates outside the ads that have popped up recently, or the short news clips.

There have been scandals (it’s New York City politics—why wouldn’t there be?), surprise entrants into the race, and even the day-to-day legislation of the city has played its role in changing the conversation on the trail.

“You couldn’t write this stuff,” has become the unofficial slogan of the campaign.

If you have sat on the sidelines until now, or missed an episode of Electing the Next Mayor of New York City, have no fear. We will catch you up here with a simple recap of the highlights.

Stringer for Mayor?
Scott Stringer, the Manhattan borough president, had high ambitions of becoming the next mayor, and spent much of 2012 garnering support for the job. In November 2012, Stringer dropped his mayoral campaign to launch what was at the time an uncontested seat for city comptroller. He currently faces former Gov. Eliot Spitzer in one of the most hotly contested races in the city. Polls show Stringer down 19 points to Spitzer, who resigned as governor in 2008 after reports surfaced he used a prostitute.

Jumping in the Race
After losing in a close race to Mayor Michael Bloomberg in 2009, former comptroller Bill Thompson officially entered the race in 2011. In what were not surprising moves, Public Advocate Bill de Blasio, City Council Speaker Christine Quinn, and City Comptroller John Liu joined him, with everyone in the game by the end of March.

Mayoral Forum Circuit
This year has seen a record number of mayoral forums, with some candidates attending multiple forums per day to get out their messages. The backdrop provided candidate interaction early, although after a few months, the forums became formulaic with candidates offering the same responses on many of the same topics.

Weiner Jumps In
Anthony Weiner, a former congressman who resigned in 2011 after tweeting illicit photos of himself, shocked the political world by jumping into the race in late May. He spent weeks working the apology tour before turning to his ideas. His idea books became a hit and Weiner even topped the polls.

Weiner Scandal Part Deux
Weiner’s rise to the top was short lived. On July 23, new revelations emerged he had continued his illicit behavior for a year after his resignation from Congress. His poll ratings plummeted and the latest poll showed him with an 85 percent disapproval rating among voters.

Liu’s Beleaguered Campaign
John Liu’s campaign has been under federal investigation since 2009 following a series of articles written by Epoch Times. In May of 2013, Liu’s former campaign treasurer and a fundraiser were found guilty of attempted wire fraud after soliciting straw donors. Liu’s campaign lost out on $3.5 million in public matching funds from the Campaign Finance Board based on trial evidence and the board’s own investigation. Liu continues to stay in the race, although he has never polled above seven percent.

Stop and Frisk
The City Council passed historic legislation in late June, which will reform the controversial police tactic of stop and frisk. The issue has divided the field’s leading candidates with discussions on police commissioners, and how they will handle policing during their tenure.

On Aug. 12 a federal judge ruled the practice violated the rights of citizens, and ordered a federal monitor, adding another level to an already complicated police plan.

Quinn’s Book
Quinn released a memoir, “With Patience and Fortitude,” in which she detailed her struggles with bulimia and alcoholism, issues the public figure had not shared previously. While the revelations added a personal touch to her campaign, it did little for her pocketbook. Sales for the book were around 100 copies a month after its release, according to the New York Times.

Union Contracts
Candidates vying for coveted union endorsements have had to wade into the waters knowing they will have to address all of the city union contracts, which have expired under Bloomberg. All the candidates have vowed to address the issue, but refuse to say if they would award retroactive pay to union workers. Budget wonks have put the price tag in the billions.

Labor endorsements have been split with each of the top three leading candidates taking at least one major labor union endorsement.

Paid Sick Leave
Speaker Quinn, who blocked paid sick leave for years citing economic troubles, took major hits early on in the campaign trail. In May, she passed the bill, albeit with a caveat: the economy must hit certain marks in 2014 for the bill to go into law. Opponents said the bill was watered down and passed as a political move.

Spitzer Runs for Comptroller
Former Gov. Eliot Spitzer’s entrance into the comptroller’s race created a media circus in an already highly publicized election. While not running for mayor, heavy attention has been paid to a race, which normally would not draw much fanfare, especially on a national level. This has left less airtime for issues in the mayor’s race as media focus has been drawn away.

The Race Heats Up
With the races heating up, voters can expect to see much more face time with candidates. All of the campaigns have fired up the television ads, and the officially sponsored Campaign Finance Board debates will hit the airwaves later this month.