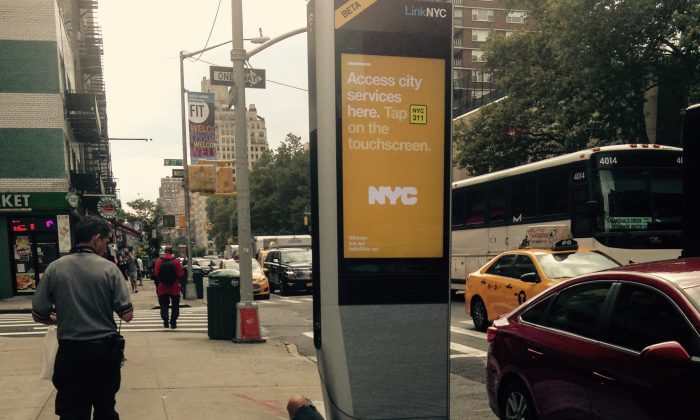 A man lies next to a LinkNYC kiosk on Eighth Avenue with headphones on, New York City, Aug. 25, 2016. (Charlotte Cuthbertson/Epoch Times)
New York

NYC’s Free Wi-Fi Kiosks Get Update After Inappropriate Use

NEW YORK—The city removed the web browsing feature on its 400 free Wi-Fi hubs on Sept. 14 after complaints of misuse and unsavory behavior.

Council member Corey Johnson said his office had received a flood of complaints about the kiosks, especially along Eighth Avenue.

“For hours at a time, these kiosks are often monopolized by individuals creating personal spaces for themselves, engaging in activities that include playing loud explicit music, consuming drugs and alcohol, and the viewing of pornography,” Johnson said in a letter to relevant authorities on Aug. 17.

The LinkNYC kiosks will still provide free phone calls, maps, device charging, and access to 311 and 911.

“We will continue to learn and improve the LinkNYC experience for people who use it and also for the people who live and work near the kiosks,” LinkNYC said in a statement Sept. 14.

Johnson said in a statement after the changes were announced that he was “extremely grateful for the speed at which they’re working to correct them [problems].”

In response to community feedback, LinkNYC had already dimmed the light on the kiosk displays and limited their maximum volume at night.

The kiosks, largely in place for their digital advertising capabilities, started popping up eight months ago. Since then, nearly 475,000 New Yorkers and visitors have signed up to use the public Wi-Fi, which has been used more than 21 million times.

The project is a public-private partnership between the city and CityBridge, a consortium of leading experts in technology, media, connectivity, and user experience.

According to a test by Gizmodo, the LinkNYC Wi-Fi is “obscenely fast.” Gizmodo compared the free Wi-Fi at the kiosks against Starbucks’ free Wi-Fi, a subway platform, and the Gawker offices in January.