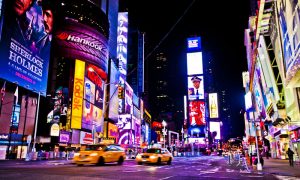 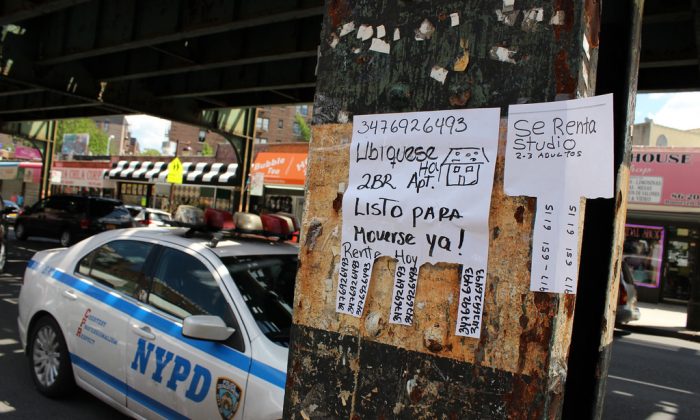 Underneath the subway tracks in Jackson Heights, May 2014. The photo is a part of the photography exhibition Right to Remain, which showcases different communities facing displacement across the city. (Karina Hurtado-Ocampo)
New York

NEW YORK—Karina Hurtado-Ocampo, 26, born and raised in Jackson Heights, remembers getting out of the subway station at 74th Street in Queens and seeing the long lines, at the two taco carts, that would continue far down Roosevelt Avenue.

The abundance of street food was characteristic of the neighborhood, and many knew the vendors by name.

It’s a working-class, 24-hour neighborhood, Hurtado-Ocampo explained, and the residents could buy from the vendors no matter when they got home from work.

Now the vendors have been replaced by a pizza chain store. It’s just one piece of the rapidly changing neighborhood, but it prompted Hurtado-Ocampo to start taking photographs, to document her home and community lest it be lost forever.

“You grew up in the space, and all of a sudden the memories that were once there and the physical reminder of those memories are no longer there,” said Hurtado-Ocampo at the opening of Right to Remain, an exhibition of photos taken by people documenting their own communities across various neighborhoods.

Communities across the country are fighting to remain in the neighborhoods they helped create, and in New York City it will be a test of the de Blasio administration’s commitment to community-oriented development.

Late spring, the mayor announced Housing New York, his plan to build 80,000 new affordable units and preserve 120,000 more. Much of the building component relies on the strong housing market, and the overall strategy is to require more affordable units from developers going forward.

But it will be crucial to focus on neighborhoods as a whole, the administration has stressed.

“I think Housing New York recognizes that our development and preservation efforts have to be guided by meaningful community engagement,” said Vicki Been, the housing preservation and development commissioner, at a recent Citizens Budget Commission breakfast.

Adding to a neighborhood without displacing the existing community is a problem that planners and policy makers have tried to tackle endlessly, and no formula has yet been found.

Diana Perez-Ramirez, curator of Right to Remain, says it starts with giving the existing communities a voice.

It’s a lesson in loaded language. Developers team up with a city to invest in a neighborhood, and that investment often means relying on being able to push out existing residents to make a neighborhood desirable for their target market, according to Perez-Ramirez, who started documenting her neighborhood in Garfield, Ariz., before she moved to New York City about half a year ago to teach at Columbia University.

“It all comes down to the dollars, and if we don’t have the dollars, it doesn’t matter to them,” Perez-Ramirez said.

Communities have yet to really have a seat at the table, according to Perez-Ramirez, and projects like Right to Remain come out of communities trying to create a voice for themselves.

Andrew J. Padilla, creator of the documentary “El Barrio Tours: Gentrification in East Harlem,” has seen countless friends, family members, and neighbors forced out of their community as the neighborhood changes.

“The idea of having a community, the ability and the right to have one, for many parts of the city, is being taken away,” Padilla said.

Despite that, the communities are making themselves heard.

“I think there’s a responsible way to do things,” said Hurtado-Ocampo. “The communities that are here have a right to remain here.”