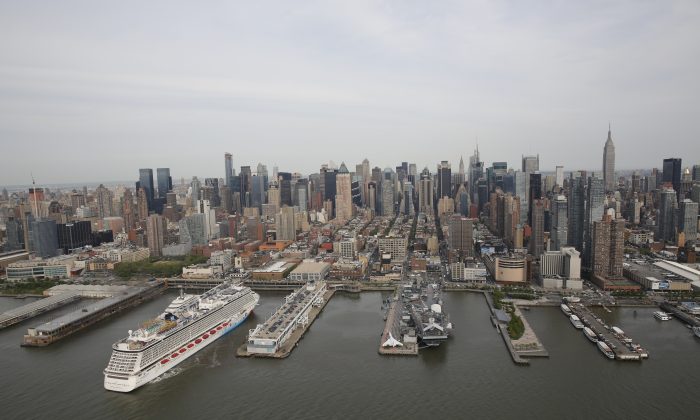 Piers 88 and 90 of the Manhattan Cruise Terminal, located on the Hudson River. (courtesy of NYCruise)
New York

The Cruise industry of New York City, run by NYCruise, contributed $229.5 million towards the city’s economic growth in 2013. The year prior, it generated just under $200 million.

Some 620,000 passengers and crew spent over $140,000 million in the city lats year, which was more than any other continental port in the nation.

“The cruise industry plays a critical role in New York City’s economy, supporting thousands of jobs and contributing to the City’s robust tourism and hospitality industry, which generates $59 billion in economic impact per year,” said NYCEDC President Kyle Kimball in a release.

There are two ports in New York City, one in Manhattan and another one in Brooklyn where passengers can board the cruise ships. NYCruise, which is managed by NYCEDC, offers itineraries to Bermuda, Canada New England, Europe, the Caribbean, and world cruises.

Because New York City has a lot to offer in terms of entertainment, lodging, shopping, dining, and cultural attractions, the average amount spent by passengers in the city ranks highest among all continental ports, and second in the country only to Honolulu.

The majority of passengers are not locals, and an increasing number are not Americans either. In 2013 there were 98 percent more international passengers leaving the city than in 2012. NYC & Company, the official marketing tourism and partnership organization for the city, made a special site for all those interested in embarking on a cruise www.nycgo.com/cruisenyc.