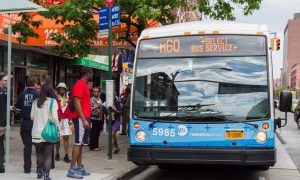 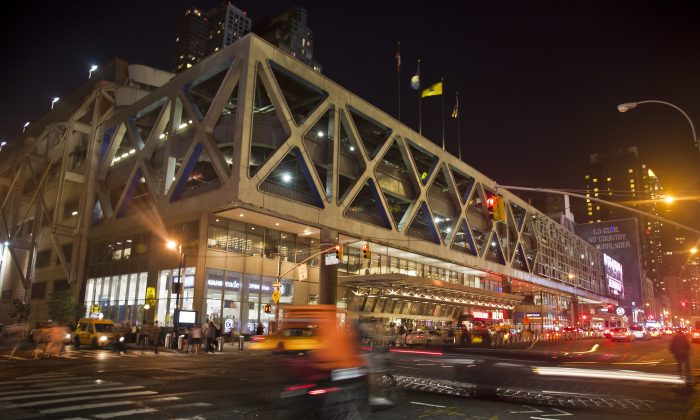 The 64-year-old Port Authority bus terminal used by both commuters from New Jersey and travelers from the rest of the country has received millions in funding for new repairs, New York, Friday, July 25, 2014. (AP Photo/Bebeto Matthews)
New York

Dark corridors of Manhattan’s aging Port Authority Bus Terminal are populated by homeless men and women, and the sweet smell of warm pretzels from rows of food stalls mixed with an occasional whiff of urine.

While public attention and money is finally turning to improving LaGuardia Airport and the Penn Station rail hub—two other run down, overcrowded New York transportation centers—the 64-year-old bus terminal has lurked under the radar for decades, seemingly stuck in a sad time warp.

A statue out front of a grinning Ralph Kramden, Jackie Gleason’s bus driver character in “The Honeymooners” sitcom from the 1950s, only serves to underscore the impression.

Port Authority commissioners have acknowledged for years that the terminal needs to be replaced, but that project—estimated to cost at least $1 billion—could be as far as a decade away for the behemoth agency that already faces financial and political woes.
Until then, commissioners this past week approved an extra $90 million for an improvement plan that will include fixes to floors and ceilings, better cellphone service, cleaner restrooms, and more street-level bus gates—a patchwork that Port Authority Vice Chairman Scott Rechler acknowledged is “sort of like putting lipstick on a pig.”

The terminal, which has run an annual deficit of about $100 million in recent years, is on a long list of priorities for the Port Authority, which has funneled billions of dollars in recent years to fund other structurally deficient bridges and tunnels and the decimated World Trade Center site. The bus terminal wasn’t included on a list of major projects in the agency’s 10-year, $28 billion capital plan released this year, though the plan includes $173 million for various improvements.

At the same time, the Port Authority is dealing with multiple investigations, including one into allegations that New Jersey Gov. Chris Christie and authority commissioners diverted $1.8 billion in agency money to nonagency projects. Christie and the other officials deny the accusations.

Those pressures could mean more of the same for the 220,000 daily bus riders—both commuters from New Jersey and travelers from elsewhere—who use the terminal filled with stores and food outlets that covers two Midtown Manhattan blocks from 40th to 42nd streets near Times Square.

Among riders’ biggest complaints is service delays caused by a shortage of gates. Each afternoon, overflow buses that don’t fit into the terminal idle on surrounding avenues as far as six blocks away.

Manhattan accountant David Perez often waits 30 minutes to get aboard a bus for his 10-minute ride home across the Hudson River to Weehawken, N.J.

At Perez’s Gate 212, the escalator was stopped—not because it wasn’t working but because, with a crowd of hundreds pressing in elbow to elbow, it could be dangerous for them to squeeze onto moving stairs.

“They need more space. They need to expand this facility,” he said.

Janna Chernetz of the Tri-State Transportation Campaign, a rider advocacy group, said the latest improvements may help with commuter comforts but they don’t address the primary problem—a terminal stretched to its operating capacity.

“What is needed is a new garage and that has been needed for years,” she said.

Hospital worker Israel Ramos, who gets to his bus via subway, said he stands in a line that winds through the building, some days including as many as 1,000 people.

Even though he has to wait in a stuffy hallway with poor air conditioning, he keeps it all in perspective.

“Actually, coming from the really hot subway platform, it doesn’t feel that bad here,” he said.