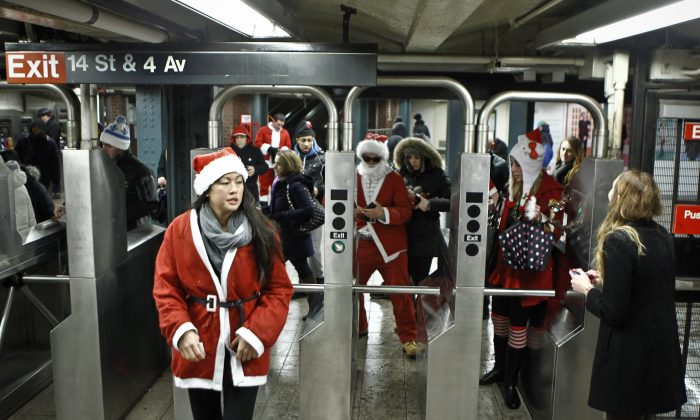 Revelers dressed as Santa Claus enter the 14th street subway station during the annual SantaCon bar crawl event on December 14, 2013 in New York City. The SantaCon annual event occurs worldwide in more than 300 cities in 44 countries. In New York some community groups have established a 'Santa Free' zone that urges bars not to serve alcoholic beverages to people participating in order to dissuade incidents of public vomiting and urination in the streets. (Photo by Kena Betancur/Getty Images)
New York

The Subway is open and trains run on Wednesday, Christmas Day.

However, according to the MTA, the trains, buses, and Staten Island Railway operate on a Sunday schedule, which means less frequent service.

On Sunday, there’s a few other changes, including the 5 train running between Dyre Av and Bowling Green only

There’s also no Z trains, so use the J train.