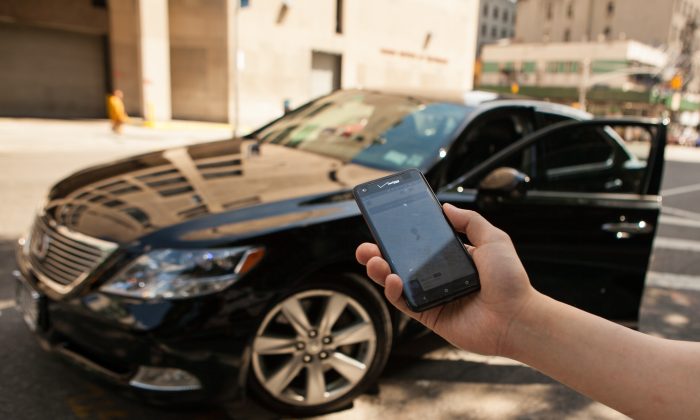 A person holds out his smartphone displaying the Uber app, before getting in a black Lexus which was hailed using the app, in Manhattan, on June 8, 2014. (Benjamin Chasteen/Epoch Times)
New York

Uber rides can cost up to nine times the regular fare because of “surge pricing,” a method that charges more for rides when demand is high and less when demand is low. The black car service mobile-app has been criticized for the dynamic pricing methods, so City Council member David Greenfield is proposing legislation to limit how much Uber can charge.“Surge pricing is a fancy name for price gouging,” Greenfield said in a statement. “It’s an unchecked system in the regulated taxi and livery industry that takes advantage of New Yorkers. A yellow cab in New York City may not charge you $225 for $25 ride simply because it’s snowing—neither should Uber.”The bill would limit fares to no higher than double the normal range of prices, according to legislation introduced Tuesday This is calculated by identifying the fourth highest rate charged by the base on four separate days in the past sixty days. Drivers violating the rule would be fined $200-$500 for a first offense and $350-$1,000 plus possible license suspension for a second offense within 24 months. There were many complaints from riders during the last holiday season when prices spiked, Greenfield said, so he is introducing the bill ahead of the holidays.Uber already limits prices during emergency events and natural disasters, under an agreement with state attorney general reached an agreement with Uber earlier this year. The existing New York law against price gouging during “abnormal disruptions of the market” was passed in the winter of 1978-1979 in response to escalating heating oil prices.