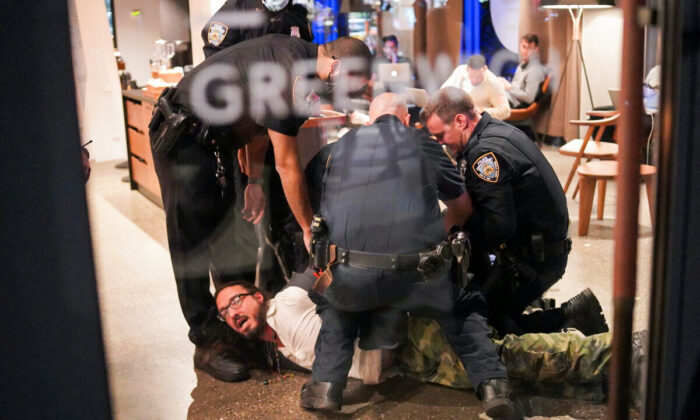 MANHATTAN, New York—A group of about 20 people gathered at Union Square on Oct. 19 and went to a nearby Starbucks to protest against the vaccine mandate imposed by Mayor Bill de Blasio, which requires restaurants to demand COVID-19 vaccination proof for customers who are to dine indoors.

The group was led by Matthew Grace, director of Medical Freedom Alliance, and Anthony Koz, who is the organizer of the group’s sit-ins. They gather regularly at Union Square to protest at different restaurants and cafes, asserting that the mandates are “causing segregation” and that people should have the right to opt out of the shots from Big Pharma.

Some members of the group told The Epoch Times that their religion doesn’t allow them to take the vaccine, others say they want their medical data to remain private, one objects to the use of animals for testing and/or production, and some believe there is a nefarious agenda to expand globalism behind the mandates.

At about 7 p.m., the protesters then went to a nearby Starbucks, ordered some food and drinks, and were turned down when they said they wanted to consume these indoors and were unable to show vaccination proof.

The group refused to leave and started chanting “we’re not leaving without seating!” and “coffee on a Tuesday night has to be a civil right!”

Starbucks staff then notified police, of which at least five promptly came and started asking the protesters to leave.

Koz and Grace then talked to the officers, who clarified to them that they were not being kicked out due to the vaccine mandate, but rather because Starbucks was asking them to leave.

After being asked numerous times to leave, most of the protesters had walked out after about 8 minutes.

As he held a small copy of the United States Constitution and refused to leave, a police officer took him by the arm and started moving him toward the door.

As Molinaro was being pushed out by another officer, he fell to the floor.

He resumed reading the 14th Amendment, attempting to quote the passage, “No state shall make or enforce any law which shall abridge the privileges or immunities of citizens of the United States.”

The police told him that if he refused to stand up and leave, they would arrest him.

When Molinaro resumed reading, one of the officers told him “put everything down, you’re under arrest!” as the officers took the Constitution out of his hands and attempted to handcuff him.

“You’re ripping the Constitution,” Molinaro said, as one officer replied, “Yes, I am.”

Molinaro then struggled to pick up the Constitution and hold on to it while being cuffed, and held on to it after being handcuffed.

As he was taken to a police car, some protesters chanted “Shame on you!” and “Hitler would be proud!”

The Epoch Times reached out to the Office of the Deputy Commissioner, Public Information, and a spokesperson for the police sent the following statement:

Koz told The Epoch Times that they plan to continue the protests and that there will be a rally at 1 p.m. on Oct. 23, named “We The People Will Not Comply” in front of City Hall.

“The mandates are not standing as long as we are here,” Koz said.