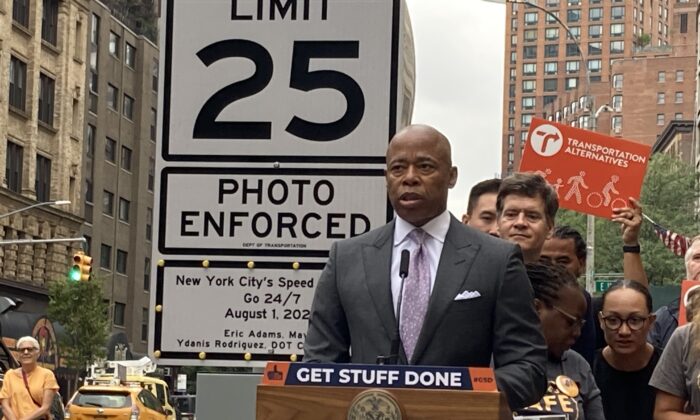 “This is not an everyday homelessness crisis, but a humanitarian crisis that requires a different approach,” Adams said Thursday in a statement announcing the plan. He compared the recent influx of “asylum seekers” to the immigration wave that came through Ellis Island some 100 years ago, accusing leaders of border states of neglecting their “moral duty” to support them.

“It’s clear that we are again dealing with a humanitarian crisis created by human hands. While other leaders have abdicated their moral duty to support arriving asylum seekers, New York City refuses to do so,” Adams said.

Adams was referring to the Governors of Texas and Arizona, who have spent millions of dollars sending busloads of migrants apprehended at the border to Washington D.C., as well as self-proclaimed “sanctuary cities” of New York and Chicago.

According to Texas Gov. Greg Abbott’s office, more than 10,000 illegal immigrants have so far voluntarily accepted the one-way bus tickets to Democrat-run “sanctuary cities.” As of Sept. 16, Texas has sent an estimated 2,500 illegal immigrants to give the Big Apple a taste of what Texas border towns are having to deal with.

With the opening of new “humanitarian emergency response and relief centers,” the buses will either arrive directly at those facilities or be directed there from Manhattan’s Port Authority bus terminal, according to Adams’s plan. “Once arriving, all asylum seekers who want them will be provided with settlement options, as well as immediate health, safety, and legal information. Asylum seekers who do not or cannot find immediate housing will stay at humanitarian relief centers for approximately 24 to 96 hours.”

“The additional assessment time will ensure asylum seekers understand their options and can get to their desired destination quickly and smoothly,” it added.

Thursday’s announcement comes after Adams confirmed the death by suicide of a female “asylum seeker” who was housed in a city-operated shelter in Queens. Adams claimed it was Abbott’s fault that the young Colombian took her own life, even though the bus rides are voluntary.

“I think the governor of Texas and others are at fault for creating this man-made humanitarian crisis,” he said on Monday at a press conference. “We didn’t fail in this city. This city is helping people.”

In response, Abbott’s office said Adams should ask President Joe Biden to fix his border policies that are continuing to cause tragedies like this.

“Mayor Adams should call on President Biden to take immediate action to secure the border—something the President continues failing to do,” Abbott’s press secretary, Renae Eze, said in a statement. “The death of every migrant, including the 53 migrants who died in a tractor trailer in San Antonio, is on President Biden and his reckless open border policies.”

“Migrants on Texas’ buses willingly chose to go to New York, having signed a voluntary consent waiver available in multiple languages upon boarding that they agreed on the destination. Each bus is stocked with food and water and makes stops along the trip to refuel and switch drivers,” Eze added, noting that passengers can actually disembark the bus at any of the stops if their cases were processed by the federal government and resulted in their release.