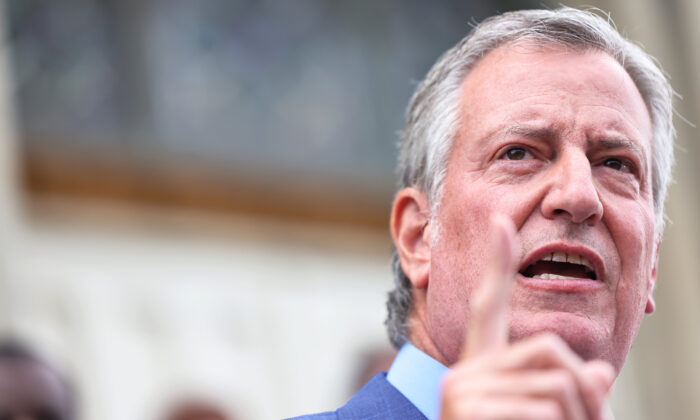 The event has been scaled back to about 15,000 people, about a quarter of the original plan, but will not be cancelled, according to the Democrat.

“We want to show that we’re moving forward and we want to show the world that New York City is fighting our way through this really important to not give up in the face of this,” de Blasio said on NBC’s “Today” show.

The event revolves around a series of musical performances and the ball drop, or the lowering of a giant silver ball, in one of the city’s busiest sectors.

An annual tradition since 1907, the event was curtailed last year, with only so-called essential workers and their families allowed to attend.

America, and New York, have in recent weeks recorded a jump in COVID-19 cases, driven by the Omicron variant of the CCP (Chinese Communist Party) virus that causes COVID-19.

Though the heightened caseload has not translated into many hospitalizations or deaths, a number of U.S. cities, including Atlanta and San Francisco, have axed New Year’s events, citing the surge.

De Blasio is determined to keep the New York celebration intact. He said he relied on guidance from his health care team and noted that attendees must not only present proof of COVID-19 vaccination, but wear masks and stay socially distanced.

“We got to send a message to the world: New York City is open,” he said, adding later, that “the way to deal with COVID is not shutdowns, it’s even more in terms of vaccination—doubling down on vaccination.”

New York City has imposed some of the strictest requirements in the nation during the pandemic, including a slew of vaccine mandates that require those as young as 5 to show they’ve gotten a vaccine before entering establishments like restaurants.

But vaccines do little to protect against Omicron infection, early studies show, although they do hold up well against severe disease, especially in the weeks following a booster dose.

De Blasio is set to leave office on Friday. His successor is Eric Adams, a Democrat who has been the president of the borough of Brooklyn.

Adams plans to take his oath of office in Times Square early Saturday.

“I am deeply humbled to officially take the oath of office at this iconic occasion, and to participate in the transfer of leadership that is a cornerstone of our democracy,” he said in a statement.