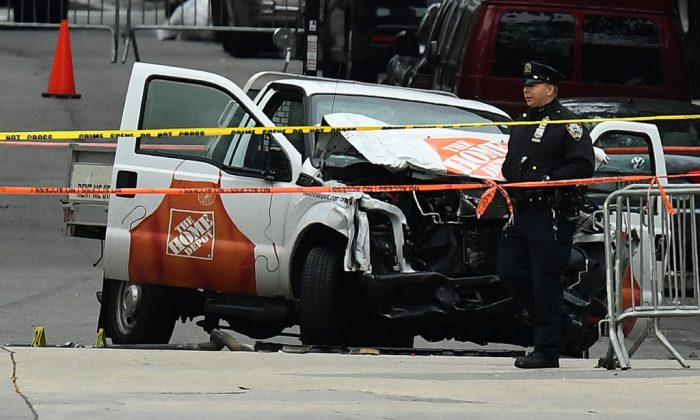 A police officer walks past the wreckage of a Home Depot pickup truck on November 1, 2017, a day after it was used in a terror attack in New York City. (JEWEL SAMAD/AFP/Getty Images)
US News

The terrorist who drove a truck down a popular Manhattan bike path on Oct. 31 killing eight and injuring at least 12 wanted to fly a flag of the ISIS terrorist group from his hospital bed, according to a criminal complaint.

Sayfullo Habibullaevic Saipov lay in his hospital bed after being shot in the abdomen. A day later he felt no remorse, say prosecutors, who visited him in his hospital room.

“Saipov requested to display ISIS’s flag in his hospital room and stated that he felt good about what he had done,” reads the complaint.

Saipov also wanted to fly the ISIS flag from the truck he used to carry out the attack, but decided against it because it would draw too much attention, the complaint says.

The document says that after his West Side Highway attack, Saipov was planning to head to the Brooklyn Bridge to attack more people. He had a bag of knives in the truck, which he couldn’t use because after he crashed the truck into a school bus, he couldn’t reach them.

Saipov arrived in court handcuffed and shackled to a wheelchair. Investigators are still trying to figure out if Saipov acted alone or with others. Mukhammadzoir Kadirov, an acquaintance of  Saipov’s who is also from Uzbekistan, was questioned by the FBI, The Associated Press reported.

Saipov was found with videos and photos from ISIS on his cell phone.

“He seemed to have followed almost to a T the instructions ISIS had put out,” said NYPD Deputy Commissioner for Counterterrorism John Miller, according to NBC.

Saipov killed eight people in the attack. Two Americans, both men who were young professionals, died after Saipov hit them in the truck he rented from a Home Depot in Passaic, New Jersey. Five men from Argentina were killed while celebrating their high school reunion, and one Belgian woman, who was on vacation with relatives, was struck also struck and killed.

After killing and injuring people along the bike path, Saipov crashed his car into a school bus.  After exiting the truck, he got out, brandishing a paintball gun and a pellet gun, before he was shot by a police officer.