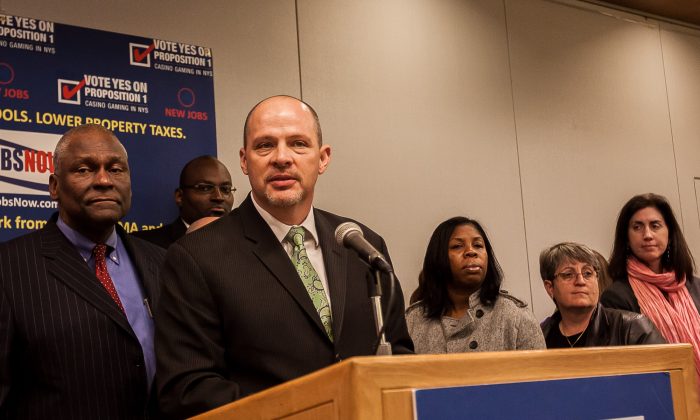 NEW YORK—Coinciding with mayoral Election Day, four new casinos in New York state would open if voters sanction a change to the state’s constitution on Nov. 5.

“As far as we’re concerned, it’s a good idea,” said Michael Mulgrew, president of the UFT, at a press conference in UFT headquarters in downtown Manhattan, Oct. 31. “People want to go to casinos. We should have them here in upstate New York,” he said, referring to the estimated $1.2 billion New Yorkers spend annually on gambling out of state.

Mulgrew was joined by the chair of the New York State Democratic Party, Keith Wright, and other supporters from NY Jobs Now, an advocacy group formed to push for the act.

Wright stressed, none of the casinos would be in New York City. “But the city would reap all the benefits,” he said.

The bill specifies possible sites for the casinos to be the Capital District-Saratoga area, the Central-Southern Tier, and the Hudson Valley–Catskill area.

It would also grant them a seven-year exclusivity period, after which another three casinos could be opened, including in New York City, if passed under legislation. Wright said he doesn’t see any benefit in allowing additional casinos in New York City “right now.”

The act should enable an estimated 6,700 construction jobs and 2,900 permanent jobs, according to the New York State Division of Budget (DOB). It also authorizes 2,000 new video terminals (VLT) on off-track betting facilities on Long Island. But those don’t require a change in the constitution and are getting a green light even if the act doesn’t pass the ballot.

The DOB estimates total tax revenue from the VLTs and casinos to be $430 million, but declined to specify how much of that figure would be generated by the VLTs alone.

Wright mentioned there is “money set aside” for treating gambling addiction, one of the negative effects associated with the industry. He didn’t specify how much though. Stu Loeser, former press secretary of mayor Bloomberg, now with NY Jobs Now, put the figure at more than $1.2 million.

The total revenue of the nation’s gambling industry was close to $100 billion in 2012.