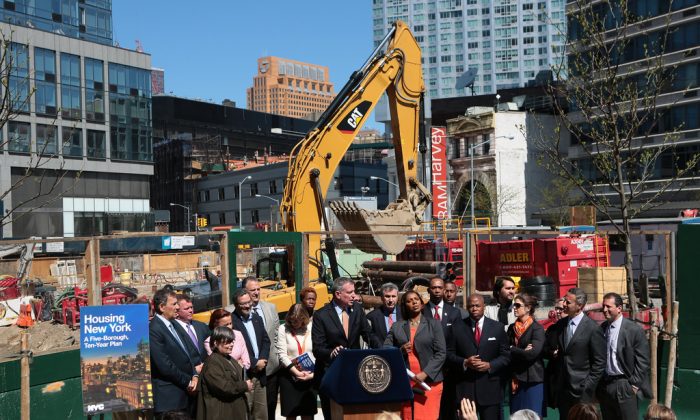 NEW YORK—Blocks away from a 500-plus unit development in Downtown Brooklyn Monday, Public Advocate Letitia James stopped by a diner for breakfast where her waitress said she was being priced out of her neighborhood. After James left the diner, she ran into a security guard who had the same story.

“Too many New Yorkers have to pay 50 percent or more of their income on rent,” James said.

On Monday, the mayor released his much-awaited $41.1 billion plan to tackle the city’s worsening housing crisis.

“This is a central pillar in the battle against inequality,” said Mayor Bill de Blasio at the site of a 52-story Gotham Organization development in Fort Greene, Brooklyn, half of which will be affordable.

With significant zoning changes and aggressive negotiations with developers, the administration aims to preserve 120,000 affordable units and have 80,000 more built in the next decade, providing affordable housing for over half a million New Yorkers.

“This is literally the largest and most ambitious affordable housing program initiated by any city in this country in the history of the United States of America,” de Blasio said. The city will be investing $8.2 billion over 10 years in addition to pulling in private money and federal and state funds.

Gone is the 80/20 model, where developers receive subsidies for making 20 percent of their units below market rate. The city will implement mandatory inclusionary zoning at as high a percentage as possible on a case-by-case basis, rather than setting a new requirement across the board.

De Blasio said the city would “drive a hard bargain” to get the most for communities out of private projects.

The city is planning to rezone or upzone neighborhoods, putting in its own capital, getting more community benefits out of tax incentives for developers, and making use of federal government funds. The city will start a dozen rezoning studies immediately, said Planning Commissioner Carl Weisbrod.

“There’s a variety of different tools that we have,” said Alicia Glen, deputy mayor of housing and economic development.

Real Estate Board of New York President Steven Spinola commended the plan for bringing up “critical objectives.” “It identifies the problems and provides a realistic roadmap for solutions.”

The preservation of affordable units will be just as important as building them, de Blasio said. “Every time we lose a unit we take a step backwards.”

According to a Community Service Society study, the city lost 40 percent of its affordable units available to low-income residents in the last decade.

It’s not unheard of for landlords to evict tenants or stop maintaining properties so as to force rent-regulated residents out, either for the purpose of selling the site, or renting units at market rates. This happens particularly in neighborhoods that are becoming more desirable.

Outside a building in the Bronx where tenants had to deal with the city’s worst landlord (as listed by the public advocate’s office when the mayor held the position), de Blasio urged tenants to report actions by landlords who try to drive them out of their apartments. The city will work with the state to seek stronger enforcement for bad landlords.

Part of the funding for the new plan will include doubling the Department of Housing Preservation and Development’s (HPD) annual capital budget. HPD will also look at market-rate units considered affordable in some neighborhoods and try to preserve them with rent regulation.