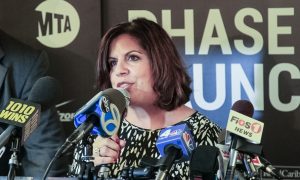 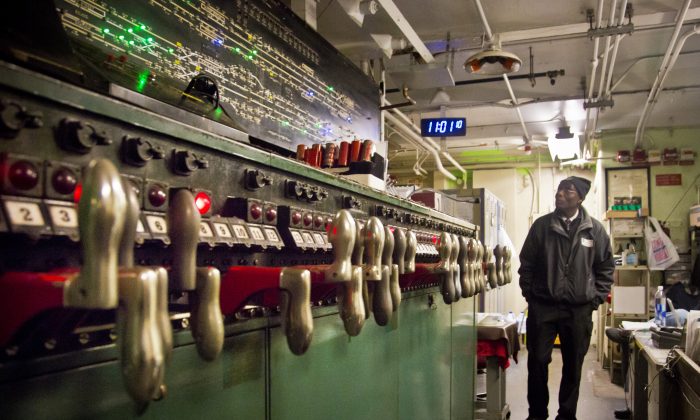 NEW YORK—New York City’s subways — the nation’s biggest mass transit network — serve more than 6 million daily riders who depend largely on a signal system that dates back to the Great Depression.

Antiquated electro-mechanics with thousands of moving parts are still critical to operations. Dispatchers still monitor most trains from 24-hour underground “towers,” and they still put pencil to paper to track their progress.

That eight-decade-old system is slowly being replaced by 21st-century digital technology that allows up to twice as many trains to safely travel closer together. But there’s a big caveat: It could take at least 20 years for the city’s 700 miles of tracks to be fully computerized.

Of the subway system’s almost two dozen major lines, just one, the L linking Manhattan and Brooklyn, currently operates on new, computerized, automated signals. And the modernization of the No. 7 line from Manhattan to Queens has begun, to be completed by 2017.

So, for at least the foreseeable future, New York subway riders can expect the snags, weekend shutdowns and overcrowding they have become accustomed to.

“We’re at the physical limits of what the original technology can carry,” acknowledges Adam Lisberg, spokesman for the Metropolitan Transportation Authority that runs the New York City Transit’s subways.

But he says safety is not being sacrificed.

“This stuff is old, but it works — it works really well,” he says, his voice rising above the roar of a 400-ton train passing through a Greenwich Village station.

Much of New York’s subways continue to operate with the equipment from the 1930s, kept running by a maintenance team that’s forced to fabricate replacement parts long out of production.

Wynton Habersham, the MTA’s chief of signals and track operations, recently led an Associated Press reporter and photographer on a walking tour through some of the 22 control “towers” — as the dispatcher spaces are called, though they’re buried deep beneath the streets.

In the cramped, worn-out Greenwich Village tower, MTA workers monitor light boards that show train locations and movement. The dispatchers answer phone calls and listen to two-way radio reports while keeping an eye on each train’s progress. A massive cabinet is arrayed with levers to move switches through a warren of electrical connections to relays that were cutting-edge technology at the same time as the Hindenburg airship.

Hidden from straphangers, these are the guts of the urban transit network that guide subway traffic through nearly 500 stations.

Behind a door off a platform on Manhattan’s West Side at 14th Street is the system’s single gleaming, high-tech operation. It allows about two dozen L trains to move each hour in both directions — compared to about 15 with the old mechanics — on a route that takes an average of 37 minutes.

Amid peeling paint, rusty stairs and old-fashioned metal cabinets is a labyrinth of digitalized panels and switches that automatically relay signals in the tunnels, tracing both direction and speed without human help. In case of an emergency, however, the computerized controls can be manually overridden by operators in the cab of each train.

The updating has allowed more cars to be added to the L line, which has become one of the city’s most crowded thanks to growth in Brooklyn’s hip Williamsburg neighborhood.

It will cost up to $250 million to convert each control tower and link it to tracks and switches. The work is included in the MTA’s five-year capital program, which uses city, state and federal money but has a $15 billion funding gap.

Europe has long been ahead of the United States, with several cities including London and Paris operating mass transit rails equipped with updated signals.

“The New York system is big and a finite amount of money was available, for decades,” concludes engineer Nabil Ghaly, the MTA’s chief signal engineer until he retired in 2007. “We have to catch up.”