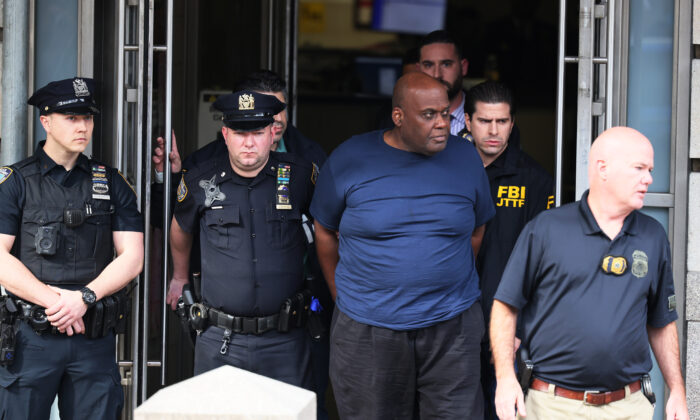 Suspect Frank James is led by police from Ninth Precinct after being arrested for his connection to the mass shooting at the 36th St subway station in New York on April 13, 2022. (Michael M. Santiago/Getty Images)
Crime and Incidents

Video feeds from security cameras at a trio of Brooklyn subway stations failed as workers tried to fix problems with their hardware less than 24 hours before a crazed gunman lit up a train full of straphangers last month, MTA officials say.

A letter sent by Metropolitan Transportation Authority Chairman Janno Lieber to members of Congress late Monday offers more detail as to why faulty video systems prevented the NYPD from obtaining images of alleged shooter Frank James after the terrifying April 12 attack wounded 10 and injured 13 others on a rush hour N train.

NYPD officials last month said James got off the uptown train at 36th St. in Sunset Park after firing 33 shots and releasing smoke cannisters. Cops said he crossed the platform and took an R train to 25th St. before casually walking onto the street.

MTA officials last month acknowledged the camera feeds were not working at the 25th St., 36th St. and 45th St. stations on the Fourth Ave. Line at the time of the shooting—and Monday’s letter explains why.

Technicians working for NYC Transit on April 7 were notified of a faulty fan in the communications room that operates the camera feeds.

They fixed the fan the next day—but the room’s alert system still indicated it was broken, according to the letter.

“On the morning of Monday, April 11, as technicians were installing new communication hardware, the camera streaming failed,” Lieber wrote.

The feeds were still out 21 hours later on April 12 when James carried out his attack, according to the letter.

Lieber wrote that at the time of the shooting, the technicians were working to restore the video feeds in the communication room—but were forced to leave due to the NYPD’s investigation.

The cameras themselves were operational, MTA officials said. But the internet systems that feed video footage to computer servers are controlled by the NYPD, according to MTA sources.

“The MTA has over the last decade systematically removed localized recording from closed circuit television cameras in the subways—like the ones at that station—and turned it over to NYPD systems,” said one transit source who asked not to be named. “The police have total control of CCTV images in the subway.”

Lieber’s letter responded to an April 21 inquiry from members of Congress asking why the camera feeds failed and what the MTA has done with roughly $50 million in security money the agency has received from the feds over the last two years.

Lieber pointed out that the subway has roughly 10,000 cameras—and the ones that were working during the shooting helped the NYPD track down James a day after the attack.

“On any given day, we have approximately 99 percent availability of our subway station security cameras,” Lieber wrote. “Our repair protocol is to fix the camera within 72 hours, and staff currently estimate compliance with this goal to be approximately 80 percent of the time.”