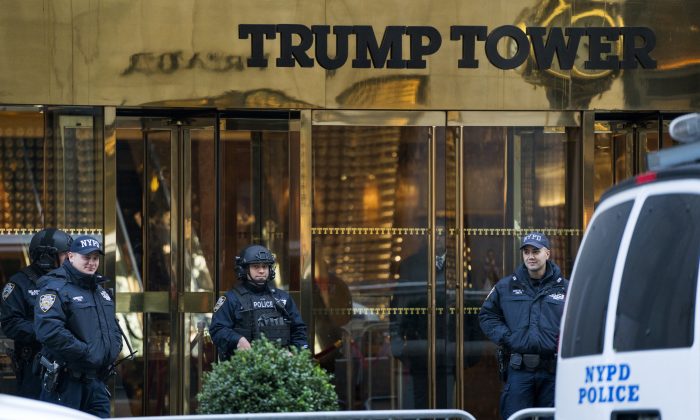 A 19-year-old student was arrested after bringing weapons inside the Trump Tower in Manhattan, police sources said, the New York Post reported on Tuesday.

Alexander Wang was arrested after walking in the building at around 6:35 p.m Monday, the sources told the newspaper.

U.S. Secret Service agents discovered a large knife, a garrote (a type of strangulation wire or cord), an M100 firecracker, a water pistol, and handcuffs.

When he was questioned, Wang told security guards, “I always walk with them,” referring to the items.

Wang described himself a survivalist who practices martial arts and also enjoys shooting off fireworks along the East River, the New York Daily News reported.

He was arrested and faces charges of criminal possession for the weapons as well as a charge of unlawful possession of fireworks.

Police searched his dorm room at Baruch College, finding more fireworks. Many law enforcement agencies consider M100 fireworks illegal, according to the U.S. Bureau of Alcohol, Tobacco, Firearms, and Explosives. An M100, which has an average load of 9 grams of “explosive mixture,” can cause “severe damage to the face, arms, and body,” the ATF says.

Trump to Display Nixon Letter to Him in Oval Office

The Trump Tower has been the place for a number of the president-elect’s meetings with potential members of his cabinet. As such, security around the skyscraper has been extensive.

On Dec. 5, a 31-year-old woman slipped by security at the Trump Tower and made it to the 24th floor where Trump lives and works, NBC New York reported. The woman, described as emotionally disturbed, was stopped by Secret Service before she was taken to the main lobby. Later, she was transported to a nearby hospital for a psychiatric evaluation.

The Secret Service also arrested an alleged stalker of Trump’s daughter, Ivanka Trump, near the tower, the New York Post reported on Dec. 10. Justin Massler, 34, was nabbed less than two blocks away, and he’s accused of sending her disturbing emails and making YouTube videos.