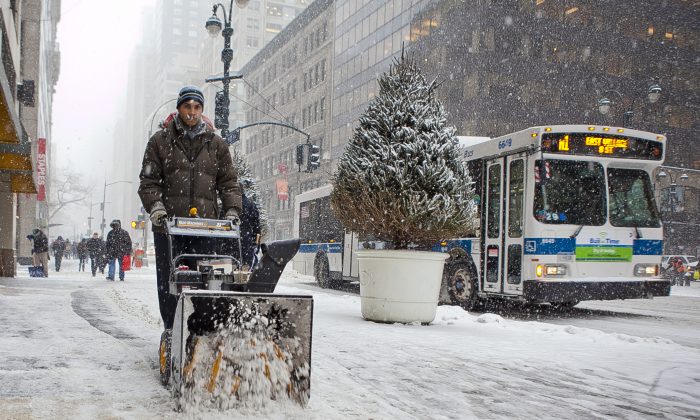 New York residents bracing for the blizzard that is to hit New York City on Monday night and Tuesday are apparently looking for “blizzard boyfriend[s]” and girlfriends.

Apparently, they’re looking to find someone to snuggle up with during the storm.

“As we sit on the brink of a major snowstorm and prepare for a nearly shut-down NYC, I’m seeking a single 20- or 30-something female who shares my excitement for snow days and wants to create the semi-romantic, mildly productive yet equally fun adult version. I’m talking endless movies, cookies, whiskey and red wine, occasional work on a strictly as-needed basis, potential igloo-making in a private garden and making out,” wrote one person in a Craigslist ad, per Business Insider.

Another person in Queens said they are looking for a “snow bunny to ride out [the] storm” for the “next two days.”

Some of the ads aren’t really safe for work, and we won’t include those.

Added another: “Looking for someone interesting to platonically chat with during the snow and see where it goes.”

Cities across the Northeast mobilized snowplows and airlines canceled thousands of flights Monday as a potentially historic storm pushed its way up the Philadelphia-to-Boston corridor with what forecasters said could be up to 2 feet of snow.

More than 4,000 flights were canceled or delayed, schools planned to close early and a hospital in New York increased staff and outfitted its vehicles with snow traveling gear.

The National Weather Service said the nor’easter would bring heavy snow, powerful winds and widespread coastal flooding starting Monday and through Tuesday. A blizzard warning was issued for a 250-mile stretch of the Northeast, including New York and Boston.

A tractor-trailer jack-knifed, and a truck hauling beer crashed into the median on a section of Interstate 81 near Harrisburg, Pennsylvania, during the Monday morning commute, forcing officials to shut down the southbound lanes. No injuries were reported.

Some schools were planning to close early or not open at all Monday in Pennsylvania, New Jersey, New York and Connecticut.

“This could be a storm the likes of which we have never seen before,” New York City Mayor Bill de Blasio said at a Sunday news conference in a Manhattan sanitation garage where workers were preparing plows and salt for the massive cleanup on about 6,000 miles of city roadways.