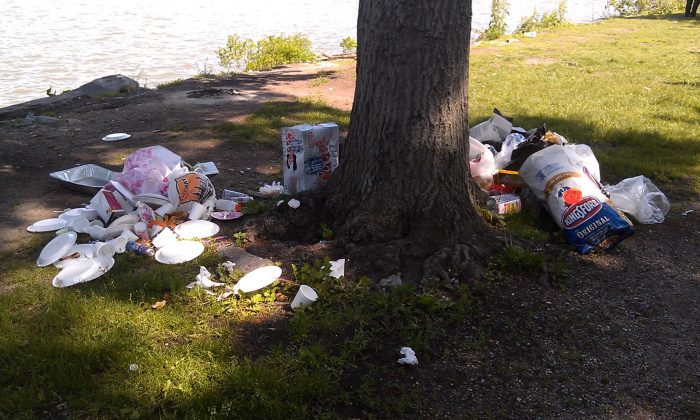 NEW YORK—The music blaring from the parking lot at West 148th St. in Riverside Park was so loud that George Moffly decided enough was enough. He downloaded an iPhone app to measure how loud it really was: the app read 150 decibels.

According to the U.S. Occupational Safety and Health Administration, 140 decibels is the threshold for pain in the ears. “I have a 12 year-old daughter. The music was so loud I feared for her hearing,” he said.

Although the Henry Hudson Parkway runs between Moffly’s apartment and Riverside Park, he can regularly hear the loud music coming from the parties held there.

The music wasn’t the only problem. In a petition letter sent to council member Mark Levine in June, 185 local residents reported mountains of trash left behind every weekend by park goers.

The petitioners further detailed: Coal from barbeques was dumped onto the bases of trees and drunken people got into fights. The parties sometimes went past midnight, long after the parking lot’s 8 p.m. closing time. Park maintenance workers have to use rakes to remove the garbage strewn on the grass.

Levine, who is also chair of the City Council Parks Committee, called the situation in Riverside Park a “chronic problem.” Seven new park patrol officers, known as PEP (Parks Enforcement Patrol), will be employed at Riverside. Police from local precincts 26 and 30 have stepped up patrolling of the 148th Street area as well.

The parks department put out additional trashcans and trash bags for people to use.

The trash and nuisance problem mostly occurs during the summer months, persisting every weekend, said chair of the parks committee at Community Board Nine, Joel Mentor. It gets worse on long weekends.

Residents said that while the situation has improved somewhat, they believe the city’s efforts won’t be a long-term solution.

“It’s not an effective solution. It’s a Band-Aid,” said Gillian Rogers, who lives on West 150th St. and Riverside Drive. She and Moffly were among the residents who organized the community to bring the issue to local officials’ attention.

Instead of using taxpayer dollars to hire new workers, she thinks tickets should be given out for people who litter. “There needs to be a ramification,” Rogers said. “If it’s not enforced, people will continue to do it.”

At a press conference held on Thursday, Manhattan Parks Commissioner William Castro said that summonses are rarely given out because it is difficult to determine who did the littering when people stay over a course of several hours.

But 22 summonses were issued for other charges in the past four weeks, according to Castro. The summons charges included urinating in public, illegal sales of alcohol, possession of marijuana, and DWI (driving while impaired).

Both Moffly and Rogers believe the parking lots at 148th and 150th Streets are the ultimate problem and want them gone. “Its existence is a vector for bad behavior,” Moffly said. People bring their stereo systems, barbeque grills, and alcohol, then empty them at the parking lots to hold their parties. Moffly said the cars’ license plates indicate that many of them are coming from outside New York City.

Rogers said she didn’t mind that people outside the neighborhood were using the space, but they should be law-abiding. “The park is a beautiful gift, not for us to abuse.”